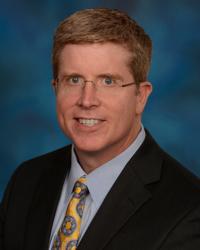 Dr. Robert O'Toole received his bachelor of science degree in mechanical engineering from Carnegie Mellon University, an MS in mechanical engineering from Stanford University, and an MD degree from Harvard Medical School. He completed his residency at the Harvard Combined Orthopaedic Program and his fellowship in Orthopaedic Traumatology at the R Adams Cowley Shock Trauma Center in the Department of Orthopaedic Surgery within the University of Maryland School of Medicine.

After completing his fellowship, Dr. O'Toole received an academic appointment as an assistant professor within the Department of Orthopaedics at the University of Maryland School of Medicine. He was promoted to associate professor and then to professor with tenure. He has served as the director of clinical research since 2005 and a fellowship director for a highly competitive orthopaedic trauma fellowship since 2009.

In addition to Dr. O'Toole's clinical and educational work as an orthopaedic trauma surgeon, he has a particular research interest in issues affecting orthopaedic trauma. Much of his funded research work entails the study of techniques to reduce complications (particular infection and blood clots) of high energy trauma and has performed in close collaboration with the DOD funded Major Extremity Trauma Research Consortium (METRC). Other research interests include biomechanics, compartment syndrome, damage control orthopaedics and management of mangled limb.

Dr. O'Toole has been part of the team responsible for continued growth in the division of orthopaedic trauma. The group now boasts 13 faculty, 9 nurse practitioners, 5 fellows, 9 research coordinators and a host of other staff who carries out the group's mission of clinical, educational, and research excellence. The division currently is actively involved in 14 prospective research trials, with over $30 million in funded trials, demonstrating significant growth over the previous decade and positioning the division to play an important national role in orthopaedic trauma in the coming years.

A University of Maryland Department of Orthopaedics faculty member may have external professional relationships with health-care related businesses. These relationships often lead to the development of new treatments and therapies. The Department of Orthopaedics believes that transparency and honesty in the reporting of these relationships is essential to maintaining trust with our patients and mitigating any conflicts of interest or perceived conflicts that may arise.

For faculty who earn royalties on the sale of medical devices, no royalties are earned on any devices sold to patients or to hospitals that are part of the University of Maryland Medical System or in any other facilities where those faculty members treat patients.