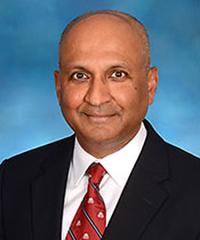 Dr. Pereira is a well-known expert in the pediatric airway and specializes in managing sleep apnea and nasal obstruction in toddlers and infants. His areas of interest and expertise are pediatric sinusitis and neck masses in newborns and children. Dr. Pereira's research on the effect of body position on sleep apnea in children has received national and international attention.

He joined the Department of Otorhinolaryngology-Head and Neck Surgery in 2007 and is director of pediatric otolaryngology.

Dr. Pereira received his medical degree at St. John's Medical College in Bangalore, India. He completed otolaryngology - head and neck surgery residencies in India and at the Royal College of Surgeons in England, and a Pediatric Otolaryngology fellowship at Le Bonheur Children's Medical Center in Memphis.

He has published several journal articles and written chapters for textbooks on these subjects.