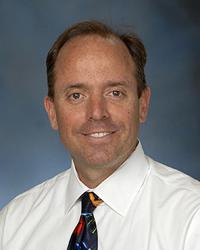 Dr. Moore has been at the University of Maryland Medical Center since completing his training in 2004. He has been named a "Top Doctor" in the specialty of General Pediatric Surgery for multiple years in Baltimore magazine's annual list.

His special interests include neonatal anomalies such as esophageal/intestinal atresia, congenital diaphragmatic hernia and congenital lung anomalies. He also cares for patient with pectus excavatum and carinatum. Whenever possible, he performs surgery with minimally invasive techniques that minimize post-operative pain and speed recovery.

Dr. Moore is a Maryland native who grew up in Prince George's and Montgomery counties. He attended Harvard College as an undergraduate and completed his medical school and general surgery training at Columbia University.

He currently lives in Columbia, Maryland with his wife, who is an ophthalmologist, and four sons. In his spare time, he enjoys open-water swimming and has participated in the Maryland Freedom Swim and Great Chesapeake Bay Swim on multiple occasions.