BALTIMORE – Pediatric emergency physicians, safe driving advocates and two restaurant chains are partnering to deliver an important life and death message as teen drivers hit the roads this summer, launching Maryland's "Practice Driving With Your Teen!" sticker campaign. This is an especially timely issue in light of recent local tragic crashes where several teenagers have died.

The days between Memorial Day and Labor Day are known as "The 100 Deadliest Days" because of the prevalence of vehicle crashes involving teenage drivers during this time.

Between June 17 & 24, 10,000 stickers reading "PRACTICE DRIVING WITH YOUR TEEN. THEY'LL ♥ U LATER." will be placed on 'To Go' takeout bags at all three Miss Shirley's restaurants (Annapolis, Inner Harbor & Roland Park) & as well as at 18 Greene Turtle restaurants across the state, encouraging adults to spend time practicing safe driving techniques with teen drivers. The sticker (shown below) features a heart graphic sporting a seat belt as the word "love." 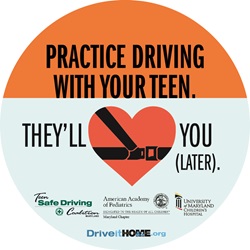 "As soon as schools are out for the summer, more teens will be on the roads," said Dr. Richard Lichenstein, professor of pediatrics at the University of Maryland School of Medicine and director of pediatric emergency medicine research at the University of Maryland Medical Center (UMMC), who also serves as chairman of the Maryland Teen Safe Driving Coalition. "We know that the more driving experience that a teen driver has with an adult driver, the less likely it is that they will get in a crash." The campaign, also supported by the Maryland chapter of the American Academy of Pediatrics, is modeled after a similar initiative in Texas. The University of Maryland Children's Hospital is funding the sticker initiative.

"Parents serve not only as driving teachers but also as role models for not texting behind the wheel," Dr. Lichenstein said, suggesting that parents consider drafting driving agreements with their teen drivers and should also be in control of the car keys.

"Teens don't get into crashes because they are uninformed about the basic rules of the road or safe driving practices; rather, studies show they're involved in crashes as a result of inexperience and risk-taking," added Dr. Lahila-Carina Ojeda, a pediatric medicine resident at UMMC. "Young drivers have high fatal crash rates because of limited driving experience and immaturity that often results in high-risk behavior behind the wheel."

According to the AAA Foundation for Traffic Safety (nationwide statistics):