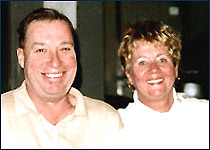 Jordan, with her husband, Bob

One day last March, 58-year-old Charlene Jordan found herself in the emergency room of a local hospital with severe stomach pain. An MRI test showed that her small intestines were twisted. She would require immediate surgery.

Doctors operated and removed 12 inches of Charlene's intestines. Several days later, she received the news that the pathology tests showed cancer. "At the time, I was sort of numb, but it really didn't seem to bother me that I had cancer, probably because they said it was a very slow growing kind," she recalls.

In fact, Charlene had an extremely rare type of cancer known as peritoneal psammocarcinoma, one that her doctor had never treated. She was referred to Nader Hanna, MD, head of Surgical Oncology at the University of Maryland Marlene and Stewart Greenebaum Cancer Center. "Dr. Hanna told me that I had one of only 10 known cases of this type of cancer in the U.S., and that he wanted to meet with the entire GI Oncology team at the Greenebaum Cancer Center to formulate the best treatment plan for me."

A PET-CT scan was done of Charlene's abdomen to compare it to her previous imaging studies and look for any major changes. Then Dr. Hanna performed a laparoscopy, a procedure in which a thin, lighted tube is inserted through the abdominal wall to inspect the inside of the abdomen, to determine if there was cancer elsewhere in her abdominal area. The results showed that there was more cancer.

Dr. Hanna explained the treatment strategy he would use to attack Charlene's unusual form of cancer. He would perform a very extensive surgery to remove the lining covering her intestines and abdominal cavity, along with any scar tissue from her previous surgery, and her spleen and gallbladder. Then, her abdominal cavity would be flushed with a heated solution of chemotherapy for two hours to kill any remaining cancer cells. This process is known as Hyperthermic Intraperitoneal Chemotherapy or HIPEC. Together, the surgery and HIPEC would take 12 to 16 hours in the operating room.

"Cancers of this type have a very high risk of spreading throughout the abdominal cavity," explains Dr. Hanna, who is also associate professor in the Department of Surgery at the University of Maryland School of Medicine. "By treating the entire area with heated chemotherapy during surgery, we hope to prevent the cancer from recurring."

Charlene's surgery took place on October 3, 2005. The very next day, she was sitting up in a chair in the Intensive Care Unit. "Dr. Hanna said that was unbelievable, considering the extensive surgery I had. The staff also told me that I was the first patient not to have a breathing tube after my surgery. My pain level was never over a four (on a scale of 1-10), and by the end of the week it was down to zero to one," she recalls.

Charlene describes herself as the type of person who hates to be ill and will do whatever it takes to get better. "Each day I improved, and each day they removed a tube. By day 6, all the tubes and needles had been removed, except for one IV, just in case," she says. On Monday, October 11, 2005, she was released from the hospital, very sore but happy to be going home.

Her positive attitude and resilience have been a huge asset in Charlene's speedy recovery. "Every day I've seen improvement in how I feel and what I'm able to do," she says. Less than a month after major surgery, she was back to work a few hours a day, and able to do light housework, drive and go to the store.

She has high praise for Dr. Hanna, her other doctors and the staff at UMGCC. "It was pretty impressive to have four or five doctors come in every day to see how I was doing," she says. "It's important to do your research, check out all your options, and make sure you pick the best doctor who is an expert in the field."

While few other people may ever experience the rare form of cancer that Charlene had, she has good advice for anyone facing a life-threatening cancer diagnosis: "Get all the loving support you can from your family, your friends, your church." Her experience -with a rare form of cancer, a very unusual treatment, and an amazing recovery - has made her one very grateful lady.