BALTIMORE – Patients with advanced malignant pleural mesothelioma (MPM) treated with a combination of surgery to remove the cancer but save their lung, plus photodynamic therapy and chemotherapy, had a median survival of nearly three years, with a subset of patients living longer than seven years, according to new research published in the Annals of Thoracic Surgery.

The disease, which is most commonly caused by exposure to asbestos, is an incurable cancer that affects the lining of the chest cavity. Patients treated with chemotherapy alone, the standard of care, typically live only 12 to 18 months. In the United States, 2,000 to 3,000 patients are diagnosed with MPM each year. 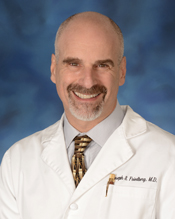 “These are among the best results ever published for patients with an epithelial subtype of pleural mesothelioma, which accounts for about two thirds of all cases,” says the lead author, Joseph S. Friedberg, MD, the Charles Reid Edwards Professor of Surgery and Head of the Division of Thoracic Surgery at the University of Maryland School of Medicine and Thoracic Surgeon-in-Chief of the University of Maryland Medical System.

“This is among the most virulent cancers known to man, and we have a long way to go, but it’s encouraging to have achieved results we can report in years not months even for these patients with such advanced disease,” Dr. Friedberg says. “Although, from a technical perspective, it is more challenging to save the lung than to sacrifice it, it does appear that this technique helps to not only extend life but to also preserve quality of life.”

The study followed 73 patients with MPM who had surgery to remove the cancer, followed by a therapy using a photosensitizing agent and light to kill microscopic cancer cells. Ninety-two percent of the patients also received chemotherapy.

Overall median survival for all the patients in the study was nearly three years (35 months), the researchers report, but that figure more than doubled, to 7.3 years, for 19 of these patients whose cancer had not spread to their lymph nodes. Median survival is the length of time at which 50 percent of patients are alive after treatment.  In addition, researchers also found that overall survival was three times higher than disease-free survival, which is the length of time until the cancer recurs.

“It’s unusual to find such a difference in between overall and disease-free survival rates. When this cancer recurs, which it almost always does, patients usually live only a few months,” says Dr. Friedberg of the study results, which were published online in November.

While the researchers caution against drawing definitive conclusions based on this non-randomized study, they are intrigued by the findings. Dr. Friedberg and his colleagues are now looking for mechanisms behind the difference, in order to work on improving survival even more.

The lung-sparing surgery is a 6- to 14-hour operation to remove detectable cancer from the lining of the chest and spares the lung and as many other normal structures as possible.  Dr. Friedberg developed his lung-sparing technique as an alternative to removing the entire lung, diaphragm and sac around the heart.

Dr. Friedberg and his colleagues say that this study shows that the lung-sparing technique can be safely used to achieve a “macroscopic complete resection” – the removal of all detectable cancer – while preserving the lung. “The role for lung-sparing surgery for mesothelioma has not been completely defined, but this series demonstrates that it is an option, even in advanced stage cases,” they conclude in the journal article.

“The results showing extended overall survival for some patients are very promising and warrant further study,” says  E. Albert Reece, MD, PhD, MBA, vice president for medical affairs at the University of Maryland and the John Z. and Akiko K. Bowers Distinguished Professor and dean of the University of Maryland School of Medicine. “Under Dr. Friedberg’s  leadership, our new Mesothelioma and Thoracic Oncology Treatment and Research Center is fast becoming an major center for important scientific discovery as well as highly specialized, multidisciplinary care for patients with mesothelioma and other thoracic cancers.”


The research was supported in part by a grant from the National Cancer Institute. (P01 CA-087971)

The University of Maryland School of Medicine was chartered in 1807 and is the first public medical school in the United States. It continues today as an innovative leader in accelerating innovation and discovery in medicine. The School of Medicine is the founding school of the University of Maryland and is an integral part of the 11-campus University System of Maryland. Located on the University of Maryland’s Baltimore campus, the School of Medicine works closely with the University of Maryland Medical Center and Medical System to provide a research-intensive, academic and clinically based education. With 43 academic departments, centers and institutes and a faculty of more than 3,000 physicians and research scientists plus more than $400 million in extramural funding, the School is regarded as one of the leading biomedical research institutions in the U.S. with top-tier faculty and programs in cancer, brain science, surgery and transplantation, trauma and emergency medicine, vaccine development and human genomics, among other centers of excellence. The School is not only concerned with the health of the citizens of Maryland and the nation, but also has a global presence, with research and treatment facilities in more than 35 countries around the world. www.medschool.umaryland.edu.


About the University of Marlene and Stewart Greenebaum Comprehensive Cancer Center