Knowing the signs and symptoms of lung cancer is important, especially for smokers and others especially at risk of developing this disease, but it is not enough. Because symptoms often appear late in the course of the disease, prevention and screening are the key to reducing lung cancer deaths.

At UM Greenebaum Comprehensive Cancer Center, our university-based experts in medical, surgical, thoracic and radiation oncology diagnose and treat all stages of lung cancer. At the same time, we work to reduce the devastating impact of this disease through research, preventions and education.

Symptoms are not common in the early stages of lung cancer, and they depend on the location and stage of the disease. When present, symptoms include coughing, coughing up blood, shortness of breath, loss of appetite, weakness or being excessively tired.

Tobacco smoke is a mix of a number of toxic substances each with the power to cause cancer. Smoking tobacco is the number one risk factor for lung cancer. It is associated with about 80 percent of lung cancers. Current and former smokers both are at increased risk.

Smoking is not only responsible for lung cancer but is also an important cause of other tumors, such as bladder and head and neck cancer, among others. Additionally, secondhand smoke exposure increases the risk of lung cancer. Unfortunately, a large proportion of those exposed to this secondary smoke are children.

Exposure to radon also increases the risk of lung cancer. Radon is a naturally occurring radioactive gas sometimes found in homes, schools and other buildings. Other substances such as asbestos, arsenic and diesel exhaust also present potential risk.

An estimated 18-25 percent of our lung cancer patients are never smokers. For this reason, it is very important to avoid the stigma of lung cancer, which is often viewed as a self-inflicted disease caused by smoking.

There are differences in the epidemiological, clinical and molecular characteristics of lung cancers arising in those who have never smoked compared with the ones in smokers, suggesting that they are separate entities.

Prevention is key. It’s important that heavy smokers or people with other risk factors have regular low-dose CT scans of the chest to screen for lung cancer.

The National Lung Screening Trial, conducted by the National Cancer Institute, found that a low-dose CT scan to detect lung cancer, when there are no symptoms, can reduce lung cancer death rates by 20 percent. If caught in its earliest stages, lung cancer has very good survival rates. The University of Maryland Medical System offers several lung cancer screening programs throughout the state.

Because smoking is such an important factor in lung cancer rates, the University of Maryland Medical Center is committed to helping people quit. Learn more about our smoking cessation resources. 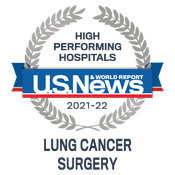