After being misdiagnosed by several other doctors, Jodi Abodeely was told she had liver cancer by her doctors at UMMC.  She thought she didn’t have much time left, but Selective Internal Radiation Therapy (SIRT), as part of her treatment at the University of Maryland Marlene and Stewart Greenebaum Cancer Center (UMGCC), saved her life.

Read Jodi’s story in her own words: 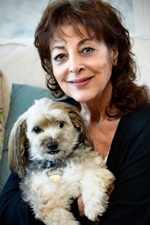 In February 2014, I started having pains in the right side of my torso. At the time, my primary care doctor thought it might be from reflux, and sent me to a gastroenterologist. However, the following weekend, the discomfort was getting worse, so I was told to go to the emergency room.

After a long day of waiting, I was admitted to the hospital and there, doctors speculated that my pain was caused by reflux, diverticulitis or appendicitis. They wanted to do an appendectomy, but my sister adamantly put a stop to that, because it was a treatment decision based merely on speculation. So I was sent home in just as much pain and discomfort as when I went in.

Once I got home, I noticed a lump protruding from my right side. Knowing that something just wasn’t adding up, my sister contacted my niece-in-law, who is a nurse in UMMC’s emergency room. She came over, took a look at my side, and rushed me to the emergency room at UMMC.

There, I had a CT scan and was seen by multiple doctors.  I remember hearing someone say the word oncologist, and I knew then that it was more than diverticulitis.

From that point on, the days were a whirlwind. I was immediately seen by Dr. Nader Hanna, a surgical oncologist at UMGCC. He told me I had liver cancer, despite having nothing in my medical history or test results that would indicate I was at risk for the disease.

During that same appointment, I met with UMGCC radiation oncologist Dr. Michael Chuong, who would be my primary cancer doctor through my treatment process. He talked to me about SIRT [selective internal radiation therapy] for inoperable liver cancer. With SIRT, beads of radiation are inserted directly into liver tumors.  Dr. Chuong also suggested I undergo chemotherapy. With this information, I contacted my nephew’s best friend, who is a radiologist. He recommended that I see Dr. Fred Moeslein for the SIRT treatment.

During the consultation with Dr. Moeslein, he thoroughly explained the way SIRT works and what the expectations would be.

At that time, I felt like I was going through the whole process only because everyone else wanted me to. When I saw my scans while in Dr. Moeslein’s office, my own understanding was that my condition was extremely severe. I actually ordered my headstone.

However, I sensed Dr. Chuong and Dr. Moeslein’s confidence and knowledge, and it became clear to me that they actually cared. I felt like I couldn’t let them down.

Within a month after being diagnosed with liver cancer, I went in for the SIRT “mapping,” which is done a week before treatment. The whole SIRT treatment procedure was amazing. It sounded so simple because my doctors put it in laymen’s terms.

Each and every staff member at UMGCC, especially the nurses during preop and postop, were exceptional. Their knowledge and expertise were above what I could have hoped for.

My normal personality is to always have some humor in any circumstance, and during the SIRT processes, it was great to be in an atmosphere where everyone was able to participate in a few chuckles.

Every step was always fully explained to me, and between the UMGCC staff and the doctors involved, I never once had any doubts that I was under the best care.

The follow up after the first SIRT was detailed and closely monitored by both Dr. Moeslein and Dr. Chuong.  I believe that their expertise in determining the next steps in my treatment were crucial to my outcome.  I was scheduled for a second SIRT treatment approximately six months after the first one.  With the two SIRT treatments, I was successfully treated and didn’t need to receive chemotherapy.

Today, it’s like I was never sick, and I wonder why this ever happened to me.

But now I know – the success of both treatments combined is due to the knowledge, expertise and confidence provided by Dr. Chuong and Dr. Moeslein, as well as the medical staff involved in my treatments.

I had so much confidence in the doctors at UMGCC that I never considered a less than stellar outcome of the treatment.  I am able to see another spring because I was lucky enough to be in the care of such an extraordinary medical facility. The following is a thank you I wrote to the doctors. It’s how I look at all my tomorrows now.

The sun will warm your heart

And the soft spring breeze

You’ll hear the melodies of the song birds

And witness nature’s birth of all things new.

Your dreams are awakened

And new roads give you direction.

You look to tomorrow with renewed vibrance

And the willingness to conquer the unknown.

And when a stranger holds out his hand for you to take,

You do so with gratitude and humility and hold on tight

So you will have all the tomorrows to look forward to,

When the daffodils bloom.