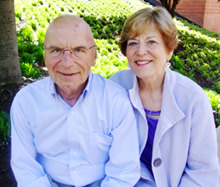 It was luck, fate or divine intervention that guided me to the University of Maryland Medical Center. I took the advice of my brother-in-law and several friends who have been treated for prostate cancer to be more aggressive in dealing with my enlarged prostate and rising PSA. I was seen by a urologist, who ordered a CT scan as part of my evaluation.

From the test, I learned that I had a sizeable tumor on my pancreas, and the doctor advised me to seek the services of a surgical oncologist and put the prostate cancer treatment on hold. The surgeon who had removed my gallbladder several years prior referred me to the University of Maryland Greenebaum Cancer Center.

My wife and I immediately did some Internet research and found surgical oncologist Dr. Nader Hanna. As soon as I read his bio, I said, "He's the guy." Even though it was after close of business, I called the cancer center and left a message. First thing the very next morning, Rosemary Wilson (new patient referral coordinator) called from the cancer center. She was just terrific and made the conversation a pleasure for me because it was clear from the onset that she was going to help me. She was my first contact with UMGCC and what a great start to what proved to be a continuous journey of experiencing care and compassion from untold numbers of people working throughout this huge medical complex.

Throughout my experience as a patient here, I felt as though I was the focus of attention for anyone who came in contact with me. I felt a genuine, personal and sincere level of wanting to be of help to me that I cannot recall having experienced in all my 67 years. It was somewhat humbling, and I was in awe by the manner in which everyone was so kind and helpful in extending their knowledge, skill and abilities, along with a human touch that seemingly has been misplaced in so much of our society today.

At my first appointment, Dr. Hanna and his team spent no less than three hours documenting and discussing my medical history. He provided my wife and me with a comprehensive review of possible different types of tumor this was likely to be. He also showed me the film of my pancreatic tumor, which measured approximately 10 cm and consumed about three quarters of my pancreas. He indicated that he had to date not removed a tumor of that size robotically.

I was amazed by not only how thorough this appointment turned out to be, but by the action plan that was put into place. I knew I was in the right place for whatever outcome I would face. I really was put at ease despite this potential life-threatening condition and the odds against a favorable outcome. A biopsy was performed and it suggested that the mass was likely cancerous.

Approximately three weeks later, I had my surgery, on March 20, 2013. Later in the evening on the day of my surgery, I learned from my wife that Dr. Hanna completed my successful surgery robotically over a period of 4 ½ hours, removing the tumor and three quarters of my pancreas. What was significant during the entire period was the consistent and very special attention that I was shown by the nurses and other patient care staff. They did everything within their purview to help alleviate my post-operative discomfort. They did not wait for me to ask, but rather were proactive in so many ways. They are truly highly competent, caring and dedicate people.

Dr. Hanna is a remarkable surgeon and an absolutely extraordinary human being. His depth and breadth of knowledge and skills have to put him among the top oncologic surgeons in the world. Along with his medical expertise, he possesses what I believe to be an inborn consciousness to perceive and respond to the needs of others – to meet all different types of people and to understand where they are coming from -- rather than communicating from a singular frame of reference or point of view. In this regard, he certainly gives meaning to the term "healer," as his persona is one of being responsive to body, mind and spirit of those under his care. He is truly gifted and serves not only his patients, but also is the perfect role model for his residents and students. Words cannot possibly describe the degree of admiration and respect I have for Dr. Hanna.

It wasn't until several weeks later that I discovered the names of all the people who were members of Dr. Hanna's operating room team that day. Each member of my team obviously performed his or her role in an exemplary fashion. What they do for the benefit of others on a day-to-day basis certainly speaks to the nature of all that is good and selfless in their character.

Dr. Hanna stopped in to see me almost daily during my short stay, but the most memorable moment was on the morning when he strode into the room with a smile on his face, announcing, "I have wonderful news! The pathology report came back, and you do not have cancer! You have autoimmune pancreatitis, a very rare condition. Praise the Lord!" My wife and I were overwhelmed and overjoyed with the news. Clearly, Dr. Hanna's commitment to each one of his patients is truly remarkable, and we are indebted to his surgical gifts!

In essence, what I experienced at the University of Maryland Medical Center with Dr. Hanna and his staff far exceeded any expectations I may have had. The staff embodies a well-oiled, highly sophisticated and talented health care team. They deserve the highest praise for their commitment to excellence in extending themselves to the individual needs of each one of their patients. I feel very privileged to have been under their care and will continue to seek their medical expertise going forward.