Patient With Chondrosarcoma Feels Confident With His Cancer Treatment Plan

Anastacio, originally from El Salvador, thought he had already gone through the toughest times of his life, until he learned he had a chondrosarcoma.

After seeing multiple experts, he truly thought he didn't have a chance at life. It was only after his first appointment with University of Maryland's Dr. Vincent Ng, Anastacio believed he could beat his cancer.

It hasn't always been a smooth road for Anastacio. He was born in El Salvador, where he spent the first two decades of his life. Eventually, he made his way to Easton, Maryland, and reunited with several uncles and friends who also immigrated to the United States from El Salvador.

Anastacio with his wife and young son.

Anastacio was living the American Dream – working as a maintenance man and enjoying time with his wife and young son. However, as we all know, life can change in an instant.

One day, Anastacio felt a hard lump on his left shoulder. However, because it wasn't particularly painful, he didn't think much of it. After all, Anastacio loves to play soccer, which can get kind of rough, and figured it was a pulled or tight muscle that would work itself out.

However, one night during a soccer game, Anastacio was hit hard by the ball on his arm. It was the first time the lump had caused him any pain. That night, he began to feel feverish, and went to the local Urgent Care clinic near his house.

It was there where Anastacio finally got an X-ray and learned the hard mass was no simple pulled muscle. The doctor didn't give him much information, besides a vague, dark diagnosis.

"All he said was that it was a bad tumor and that it was probably cancerous," Anastacio said. "This was obviously frightening and I could barely process it."

Anastacio was scared, and frankly, didn't know what to think, because he wasn't given many details. He was referred to a local orthopaedist near his home.

Those words echoed inside his head for months, and even still does now to this day.

"The first thing I did when I got home was Google osteosarcoma, and it didn't look good for me based on those results," Anastacio said. "I started thinking about my son growing up without a father and that's what really made me cry."

The orthopaedist had advised Anastacio to contact a specialist in Baltimore who could handle the complexity of his case. He had heard good things about the University of Maryland, so he went out on a limb and called the University of Maryland Orthopaedics to schedule an appointment with an orthopaedic oncologist. And that call is what made all the difference for Anastacio. 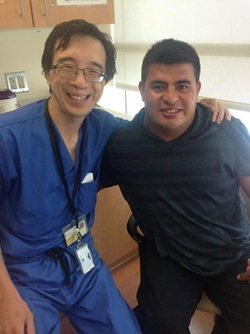 Dr. Ng and Anastacio at a recent check-up.

Shortly after his phone call, he had his first appointment with Dr. Vincent Ng.

"The moment I met him I was extremely comfortable" Anastacio said. "I could tell immediately he was personally invested in my case, and I wasn't just a name on a chart. He had a calm and reassuring demeanor."

Dr. Ng recognized it was a very aggressive sarcoma and treated it quickly and effectively. All of the tumor was removed before it had a chance to spread to another part of Anastacio's body. Dr. Ng was able to save his shoulder joint and used a donor ("allograft") bone to reconstruct the bone affected by the tumor.

Although the surgery was long and scary, Anastacio was relaxed going in.

"I had full confidence in Dr. Ng," Anastacio said. "I knew he would do everything he could to remove the cancer while also keeping my arm intact."

Even after surgery, Dr. Ng kept close tabs on Anastacio and addressed any concerns he had immediately.

"One day, I was worried about how my wound looked and I started panicking," Anastacio said. "I gave Dr. Ng a call and he told me to make the drive out to Baltimore so he could take a look. I think he used a break between other surgeries to see me."

The Trip of a Lifetime

Since his successful surgery, Anastacio was able to do something he didn't think was possible – see his parents and siblings back in his home country of El Salvador.

Just this past month, he traveled to his home country for an entire month, and his son & wife were able to meet his parents and siblings.

Anastacio is now completing rehabilitation at UMMC's Midtown Campus, where he says "at the end of the day, it's where people treat you right."

Anastacio is currently cancer-free and sees Dr. Ng regularly to make sure the cancer does not return. He is back to playing soccer and doing the activities he enjoys. 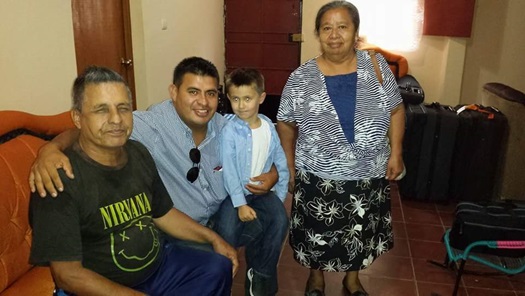 Anastacio with his son & parents in his home country of El Salvador.