Baltimore, Md. – The GammaPod ™ – a first-of-its kind stereotactic radiotherapy system to treat early stage breast cancer – has received 510(k) clearance from the U.S. Food and Drug Administration (FDA), paving the way for the manufacturer to bring the system to market for the treatment of breast cancer patients. 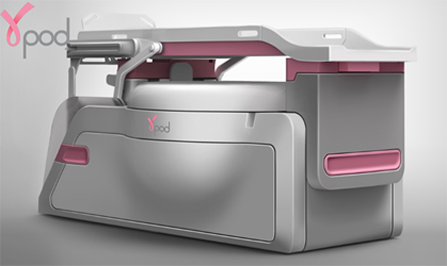 “With this breast-specific treatment system, we will be able to deliver high-dose radiation to a tumor while minimizing damage to normal breast tissue and even more importantly, to major organs such as the heart and lungs,” Dr. Regine says.

With advances in imaging and better screening, most breast cancers are diagnosed at an early stage, when the tumor is confined to the breast or nearby lymph nodes but has not spread to distant parts of the body. Patients typically have breast-conserving surgery to remove the tumor (and any lymph nodes where cancer is detected), followed by three to six weeks of radiation.

Invented by scientists at UMSOM, the GammaPod system has been under development for nearly a decade. The prototype was installed and tested at the University of Maryland Medical Center (UMMC).

“The GammaPod has the potential to significantly shorten the treatment time to a few sessions or possibly even one treatment,” says inventor Cedric X. Yu, DSc, a clinical professor of radiation oncology at UMSOM and chief executive officer of Xcision Medical Systems, LLC, which he founded in 2006. “We envision that one day we’ll be able to neutralize a tumor with a high dose of focused radiation instead of removing it with a scalpel. This approach would spare patients the negative side effects of surgery and prolonged radiation treatments, significantly improving their quality of life.”

Armed with data from a feasibility and safety study, Xcision Medical Systems, a Columbia, Md.-based company that manufactures the GammaPod, sought permission from the FDA this fall to begin marketing the system to hospitals and other medical facilities. The FDA granted the company 510(k) clearance today.

Radiation oncologists at UMMC expect to be able to offer the treatment to breast cancer patients in spring 2018.

Stereotactic radiation therapy is most commonly used to treat brain cancer and cancers in other parts of the body, such as the lung, spine and liver, where it is called stereotactic body radiation therapy, or SBRT. It delivers a high-dose of radiation directly to the tumor, sparing nearby healthy tissue, in far fewer treatments than standard radiation therapy. The GammaPod enables this technology to be used for breast cancer.

The GammaPod system targets a tumor with thousands of precisely focused beams of radiation from 36 rotating sources. A patient is treated lying on her stomach with her breast immobilized by a patented vacuum-assisted cup, which is locked into the treatment couch. The couch moves during treatment as radiation “paints” the tumor. Treatments take five minutes to 40 minutes, depending on the therapy plan.

The machine gets its name from the type of radiation (gamma rays) and the pod-like shape of the machine.

As part of the FDA review process, UMSOM investigators submitted data from 15 patients treated with the GammaPod in a feasibility and safety study, starting in early 2016. Patients received a single “boost” treatment with GammaPod to the site where their tumor was removed, along with three weeks of traditional radiation treatments to the whole breast. The total treatment regimen was reduced by three to four treatments.

Initial results indicate that the GammaPod system can deliver radiation to the breast safely, according to the study’s principal investigator, Elizabeth M. Nichols, MD, an assistant professor of radiation oncology and  clinical director of the Department of Radiation Oncology at UMSOM.

“The GammaPod delivers a uniform dose to the tumor but the amount of radiation drops off rapidly outside the targeted area with a substantially reduced dose to healthy breast tissue. We believe that this reduced exposure will result in better cosmetic outcomes for patients,” says Dr. Nichols, a radiation oncologist who treats patients at the UMGCCC and the Maryland Proton Treatment Center.

In upcoming clinical trials, researchers will investigate various ways to use the GammaPod before and after surgery, gauging its effectiveness in reducing the size of a tumor to be removed or giving a sufficient dose to destroy it. They will also seek to identify subgroups of patients who may not require surgery after treatment.

“Dr. Yu is a brilliant scientist and inventor who holds more than 20 patents for technology advances in radiation oncology that have had a significant impact on how we treat cancer. He has shown tremendous vision and tenacity in his quest to bring this first-of-a-kind device to market for the benefit of breast cancer patients,” says UMSOM Dean E. Albert Reece, MD, PhD, MBA, executive vice president for medical affairs at the University of Maryland and the John Z. and Akiko K. Bowers Distinguished Professor. “The development of the GammaPod represents the extraordinary innovation and entrepreneurial spirit that we foster through our faculty at the University of Maryland School of Medicine.”

DISCLOSURE: Dr. Yu and Dr. Regine are inventors of GammaPod with patent rights and are also shareholders of Xcision Medical Systems, LLC, which manufactures the device. Dr. Yu is Xcision’s founder and chief executive officer.

Commemorating its 210th Anniversary, the University of Maryland School of Medicine was chartered in 1807 as the first public medical school in the United States. It continues today as one of the fastest growing, top-tier biomedical research enterprises in the world -- with 43 academic departments, centers, institutes, and programs; and a faculty of more than 3,000 physicians, scientists, and allied health professionals, including members of the National Academy of Sciences, and a distinguished recipient of the Albert E. Lasker Award in Medical Research.  With an operating budget of more than $1 billion, the School of Medicine works closely in partnership with the University of Maryland Medical Center and Medical System to provide research-intensive, academic and clinically-based care for more than 1.2 million patients each year. The School has over 2,500 students, residents, and fellows, and nearly $450 million in extramural funding, with more than half of its academic departments ranked in the top 20 among all public medical schools in the nation in research funding. As one of the seven professional schools that make up the University of Maryland, Baltimore campus, the School of Medicine has a total workforce of nearly 7,000 individuals. The combined School and Medical System (“University of Maryland Medicine”) has a total budget of $5 billion and an economic impact of nearly $15 billion on the state and local community. The School of Medicine faculty, which ranks as the 8th-highest public medical school in research productivity, is an innovator in translational medicine with 600 active patents and 24 start-up companies. The School works locally, nationally, and globally, with research and treatment facilities in 36 countries around the world. Visit medschool.umaryland.edu/