Charles Hughes, 49, and April Biggs, 28, of York, Pennsylvania always considered each other family despite no actual biologic connection. Now they are closer than ever since April donated part of her liver to save her “uncle Charles.” 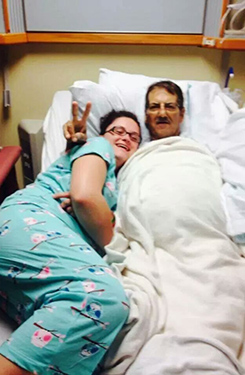 Backing up a bit, Charles was receiving treatment for liver failure at Mercy Medical Center in Baltimore and was thrilled with the relationship he shared with Dr. Anurag Maheshwari . Dr. Maheshwari explained to Charles that he was going to eventually need a transplant and offered to introduce him to the team at the University of Maryland Medical Center.

“I believe in Dr. Maheshwari,” said Charles. “He told me he’d save my life, and I listened to him.”

Charles met with the liver transplant team at UMMC and was put on the wait list for a deceased donor. During his transplant evaluation, he learned about living donor liver transplants as an option to help patients get transplanted sooner. But who would give such an incredible gift for him, he wondered?

Enter April, a nursing assistant at a nursing home and the “adopted niece” of Charles. Charles served as a male role model in young April’s life and continues to have a tremendous influence on how she raises her own two children.

“I donate blood regularly at work, and one day uncle Charles asked me what my blood type was,” she said. “I told him it was the same as his, and his eyes filled up with tears. He said, ‘they tell me it’s easier to get a transplant with a living donor. I’m not asking you to do this for me – it’s up to you.’”

April attended an informational meeting about living liver donation at Mercy, presented by the University of Maryland liver transplant team. She left that meeting and scheduled an appointment with Dr. John LaMattina, director of the living donor liver transplant program, to ask specific questions.

“Dr. LaMattina explained everything and went really in-depth,” said April. “He even drew pictures to make sure I understood exactly what I could expect from the surgery.”

April proceeded with the full living donor work-up and was approved as a match for Charles.

“The night before the surgery was the only time I got nervous,” said April. “I was more scared and worried for my uncle than for me, just hoping this would work for him.”

The transplant occurred on June 10. “The surgeons did the most wonderful job,” said Charles.” I put my life in their hands, and they did their job. I promised my grandkids I would give everything I had to this surgery. That’s what brought me through this. I walked that whole hospital floor the very next day after surgery and climbed a flight of steps.”

Both April and Charles recovered well and were discharged from the hospital in record time – four days for April and seven days for Charles. 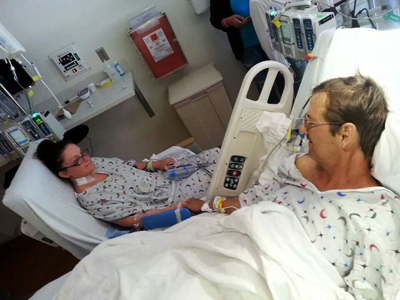 Charles teases April, saying he’ll always have a part of her with him. “Now I’ve got a 28-year old liver!” he boasts.

For April, donating part of her liver was a change of heart. “I’d always said I didn’t want to be an organ donor. The more I looked into it, the more I thought that everyone deserves a second chance if they can have it.”

April and Charles are now committed to helping others consider living donation as an option to help their loved one.