Designer Mindy Lam paid very little attention to her health, while working tirelessly to achieve her dreams and take care of her daughter. 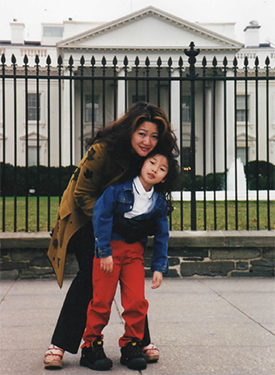 Mindy is the force behind Mindy Lam Jewelry, an internationally-known line of couture accessories. Her work combines metals and jewels into intricate designs. Before Mindy became sick, she was living the hectic lifestyle of a successful entrepreneur. She fully dedicated herself to her brand and to providing for her daughter Kai Sia, consistently working until 3 in the morning and even wearing the arm of the couch, her work station, threadbare.

It was easy for Mindy to ignore some of the warning signs: she attributed her bloated figure, vomiting and other symptoms to stress. But when Mindy's heart stopped, her declining health became impossible to ignore. Kai received a call that her mom was in the hospital in New York. She was only 16 at the time.

After Mindy was revived, she found out that she had end-stage renal failure due to untreated high blood pressure. She would need dialysis and eventually a kidney transplant.

Kai recalls her first conversation with her mother following her health scare: "When she woke up I said, 'I'm going to give you my kidney one day." And mom said, 'No, you're not.'"

Mindy was transferred from the New York hospital to the University of Maryland Medical Center (UMMC) for care. Mindy was not accustomed to accepting help, especially from her daughter, and she insisted that she would be OK on home dialysis.

During the three years Mindy was on dialysis, she researched into its continued efficacy. Through her research, she learned that there was an increased risk of cancers from continued use of her kidney medication—home dialysis was not a viable, long-term option. Her doctors encouraged her to put herself on the transplant waiting list, but she kept making excuses. She always figured that someone else needed a transplant more than she did, despite being unable to work and getting progressively sicker.

During those three years of Mindy's declining health, Mindy and Kai's quality of life also declined. With Mindy out of work and the cost of living to consider, the family was forced to sell their car, personal belongings and even their house to pay for everyday expenses.

Kai knew Mindy needed a transplant in order for their lives to get back on track. She began making healthier choices, including exercising and cutting out soda completely, hoping to be well enough to donate and to convince her mother of her commitment.

"Slowly with action I realized that I could do it, I could live a healthy life… a lot of people realize by the time they want to donate that they're not healthy enough, and there aren't enough donors out there."

Kai's commitment to getting healthy and donating her kidney inspired Mindy, who eventually agreed to accept Kai's donation once she turned 18, the minimum age for a living donor. Kai was a match, and Mindy received her new kidney at UMMC.

Life is much better for Mindy. She is hard at work expanding Mindy Lam Jewelry, and her new kidney (which she named Kiki) recently celebrated its third birthday. She also takes better care of herself and gets plenty of sleep.

Kai is in good health too. She admits that she practices more discipline and eats healthier now that she has one kidney, but she hasn't been impeded since her donation, and is still able to jog five miles a day. She wants people considering living organ donation to know that it is truly a life changing procedure: "there aren't enough people giving their kidneys and people are waiting on it."

Before Mindy's transplant, her favorite word was "later" when it came to taking care of herself. Now, she embraces the present every day and recognizes the importance of quick action. To celebrate her kidney-versary and second chance at life, she created the 2/15: Life is Luxury Collection, to raise awareness of kidney disease and urge others to take care of their health. Mindy's transplant experience showed her that life, not personal possessions, is the greatest luxury.

Mindy received care at a number of hospitals, but highlights UMMC as the best. "They don't judge your race or income. They treat life as life. They fight for you and treat you like family." Each day she is thankful of her daughter and the dedicated UMMC transplant team for providing her with a second chance at life.

In one month, twenty percent of the proceeds of this special collection were donated to UMMC.