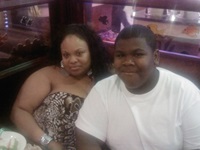 Christine Roberts, 34, of Essex, Md., had no idea how sick she was when she was transported by ambulance from a suburban hospital to University of Maryland Medical Center in June. In fact, she doesn’t even remember the trip downtown or being admitted to the Medical Center, where she received a lifesaving liver transplant June 14.

“Everything became a blur. I don’t remember anything until I woke up in the hospital and thought, “'Why am I here? How did I get here?'” recalls Roberts, a single mother who has worked as a school bus attendant for Baltimore County public schools for nearly 14 years.

“She was as close to death as you can be,” says Dr. John LaMattina, one of the surgeons who performed Roberts’ transplant and an assistant professor of surgery at the University of Maryland School of Medicine. “Her liver was failing when she was transferred here. Within two to three hours, we had her on the regional transplant list, which is as fast as we can do it. Within another few hours, a liver became available.”

Dr. LaMattina explains that some people, like Roberts, can develop acute liver failure without having a lot of symptoms. Roberts landed in a Baltimore-area hospital on June 11 with extreme exhaustion and a possible kidney infection. But doctors soon diagnosed her with acute liver failure – apparently caused by a hepatitis B infection. “The hepatitis is what caused my liver to die, pretty much,” says Roberts, who didn’t know she had the infection until after her transplant and is not sure how she contracted the virus.

“I got my new liver in a day. After they put in the last stitch, it started working on its own, like it was made for me,” Roberts says.

“I have always been an organ donor,” Roberts says. “I just felt like when I die, if there is something in me that is still working and it can be used to save another person’s life, I’m all for that.” She never dreamed that she would benefit from the generosity of a like-minded organ donor.

“I feel very blessed. I guess my time is not up. There must be something that God wants me to do,” Roberts says, adding that she is “mom and dad” to her son, Elijah, 15.

Dr. LaMattina says, “She was moments from death and now she will go back to living a normal life, except for having to take immunosuppressive medicine to prevent rejection.”