This story is published in UMMC Connections, the newsletter for the University of Maryland Medical Center. It is published three times a year, and produced by the Office of Corporate Communications and Public Affairs.

University of Maryland Medical Center's longstanding national prominence in organ transplantation has been further elevated with its recent status as the leading center in the United States for performing kidney transplants in African-Americans.

UMMC performed more kidney transplants in African-Americans in 2014 than any other center in the country — a total of 128. The patients who received these transplanted kidneys represent just under half of the 270 total kidney transplants done at UMMC that year, according to Jonathan Bromberg, MD, PhD, head of the Division of Transplantation at UMMC and a professor of surgery, microbiology and immunology at University of Maryland School of Medicine.

Several compelling factors explain UMMC's excellence in this aspect of kidney transplantation, Bromberg said, including its commitment to surgical innovation and to serving the needs of the patient population in the Baltimore-Washington area and beyond.

"It's part and parcel of who our patient population is here in the Mid-Atlantic region and particularly the Baltimore area, and it's important in terms of really serving your population," he said. "We can find any number of research papers detailing the unfair distribution of health care among various populations in the country. This shows that our outreach efforts to our community are very effective."

Although African-Americans comprise about 13 percent of the American population, they represent 34 percent of the patients waiting for a donor kidney, according to the US Department of Health and Human Services. In 2014, 73 percent of African-American organ-transplant recipients received kidneys. Because this population experiences higher rates of diabetes and high blood pressure than do other racial groups, it is especially vulnerable to end-stage kidney disease, for which organ transplant is considered the gold-standard long-term treatment.

UMMC does more kidney transplants in African-Americans than even its peer institutions in the region (from Philadelphia to Washington, DC) who serve the same patient population or similar numbers of African-Americans, Bromberg noted.

"We tend to be very aggressive in terms of accepting patients and accepting organs," said Bromberg, a kidney and pancreas transplant surgeon who came to UMMC in 2010 and is a renowned expert in transplant immunology. "That's been the history of this program."

UMMC's efforts to offer specialized kidney transplants have helped increase the donor pool for its patients. For example, UMMC is among the few medical centers that transplant kidneys from deceased donors who have a subtype of the highly common blood type A into kidney-failure patients with type B blood, which is particularly common in African-Americans. UMMC also boasts unusual abilities in offering a complex type of kidney transplant required when donors have multiple renal arteries instead of a single artery. Many transplantation centers can't accommodate these donors.

Expertise Guides Use of Living Donors

"When they have renal failure and are obese, they can't really exercise and have many restrictions," Dr. Bromberg explains. "For these people, losing weight is almost impossible."

But UMMC transplant clinicians employ their expertise in discerning which family members of kidney transplant hopefuls can successfully provide a kidney to their loved one without putting their own health in jeopardy. Conditions such as obesity, diabetes and high blood pressure can run in families.

"We also have a long discussion with family members about the risk," he said. "We don't want to put any potential donor at significantly increased risk of having a bad outcome 20, 30 or 40 years later... they might need that kidney." 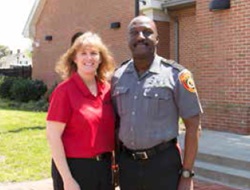 Lenox Trams, at right, a police officer in Easton, was able to undergo a lifesaving kidney transplant in March at UMMC when Jill Garvey, his coworker of 15 years in the Easton Police Department, volunteered to donate one of her kidneys.