A Patient's Guide to Anatomy and Function of the Spine

The spine is one of the most important parts of your body. Without it, you could not keep yourself upright or even stand up. It gives your body structure and support. It allows you to move about freely and to bend with flexibility. The spine is also designed to protect your spinal cord. The spinal cord is a column of nerves that connects your brain with the rest of your body, allowing you to control your movements. Without a spinal cord, you could not move any part of your body, and your organs could not function. This is why keeping your spine healthy is vital if you want to live an active life.

What exactly is the spine? Your spine is made up of 24 small bones (vertebrae) that are stacked on top of each other to create the spinal column. Between each vertebra is a soft, gel-like cushion called a disc that helps absorb pressure and keeps the bones from rubbing against each other. Each vertebra is held to the others by groups of ligaments. Ligaments connect bones to bones; tendons connect muscles to bones. There are also tendons that fasten muscles to the vertebrae. The spinal column also has real joints (just like the knee or elbow or any other joints) called facet joints. The facet joints link the vertebrae together and give them the flexibility to move against each other. 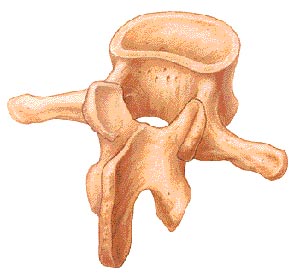 Each vertebra has a hole in the center, so when they stack on top of each other they form a hollow tube that holds and protects the entire spinal cord and its nerve roots. The spinal cord itself is a large collection of nerve tissue that carries messages from your brain to the rest of your body. In order for your body to function, you need your nerves. The spine branches off into thirty-one pairs of nerve roots. These roots exit the spine on both sides through spaces (neural foramina) between each vertebra.

The spine itself has three main segments: the cervical spine, the thoracic spine, and the lumbar spine. The cervical is the upper part of the spine, made up of seven vertebrae (bones). The thoracic is the center portion of the spine, consisting of 12 vertebrae. The lower portion of the spine is called the lumbar spine. It is usually made up of five vertebrae, however, some people may have six lumbar vertebrae. Having six vertebrae does not seem to cause a problem. Below the lumbar spine is the sacrum. The sacrum is actually a group of specialized vertebrae that connects the spine to the pelvis. During development (those nine months before birth), these vertebrae grow together or fuse creating one large "specialized" vertebral bone that forms the base of your spine and center of your pelvis. The nerves that leave the spine in the sacral region control the bowel and bladder functions and give sensation (feeling) to the crotch area.

The normal spine has an "S"-like curve when looking at it from the side. This allows for an even distribution of weight. The "S" curve helps a healthy spine withstand all kinds of stress. The cervical spine curves slightly inward, the thoracic curves outward, and the lumbar curves inward. Even though the lower portion of your spine holds most of the body's weight, each segment relies upon the strength of the others to function properly.

Now let us look at the specific parts that make up your spine.

The bony ring attached to the vertebral body consists of several parts. First, the laminae extend from the body to cover the spinal canal, which is the hole in the center of the vertebrae. Second, the spinous process is the bony portion opposite the body of the vertebra. You feel this part if you run your hand down a person's back. Then there are two transverse processes (little bony bumps), where the back muscles attach to the vertebrae. Finally, the pedicle is a bony projection that connects to both sides of the lamina.

The vertebra, like all bones, has an outer shell called cortical bone that is hard and strong. The inside is made of a soft, spongy type of bone that is called cancellous bone.

The annulus is the disc's outer layer and the strongest area of the disc. It also helps keep the disc's center intact. The annulus is actually a strong ligament that connects each vertebra together.

The facets are the "bony knobs" that meet between each vertebra to form the facet joints that join your vertebrae together. There are two facet joints between each pair of vertebra, one on each side. They extend and overlap each other to form a joint between the neighboring vertebra facet joints. Without the facet joints, you would not have flexibility in your spine, and you could only move in very straight and stiff motions. 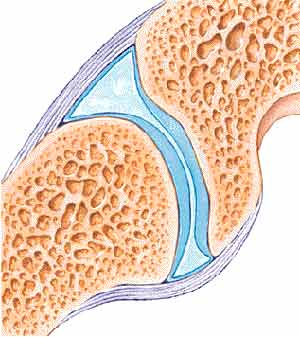 The neural foramen is the opening between every two vertebrae where the nerve roots exit the spine. The nerve roots travel through the foramen to reach the rest of your body. There are two neural foramina between each pair of vertebrae - one on each side. Without the foramen, nerve signals could not travel to and from the brain to the rest of your body. Without nerve signals, your body would not be able to function.

The nerve fibers in your spinal cord branch off to form pairs of nerve roots that travel through the small openings (foramina) between your vertebrae. The nerves in each area of the spinal cord connect to specific parts of your body. This is why damage to the spinal cord can cause paralysis in certain areas and not others -- it depends on which spinal nerves are affected. The nerves of the cervical spine go to the upper chest and arms. The nerves in your thoracic spine go to your chest and abdomen. The nerves of the lumbar spine then reach to your legs, bowel, and bladder. These nerves coordinate and control all the body's organs and parts, and let you control your muscles.

The nerves also carry electrical signals back to the brain that allow you to feel sensations. If your body is being hurt in some way, your nerves signal the brain that you have been hurt. Damage to the nerves themselves can cause pain, tingling, or numbness in the area where the nerve travels.

The paraspinal muscles refer to the muscles next to the spine. They support the spine and are the motor for movement of the spine. Your joints allow flexibility and your muscles allow mobility. There are many small muscles in the back - each controlling some part of the total movement between all the vertebrae and the rest of the skeleton. These muscles can be injured directly, such as when you have a pulled muscle or muscle strain of the back muscles. The muscles can also cause problems indirectly, such as when the muscles are in spasm after injury to other parts of the spine.

When you experience a muscle spasm, it is because your muscle tightens up and will not relax. These spasms usually occur as a reflex - meaning that you cannot control the contraction of these muscles. When any part of the spine is injured including: a disc, ligaments, bones, or muscles, the muscles automatically go into spasm to reduce the motion around the area. This protective mechanism is designed to protect the injured area. 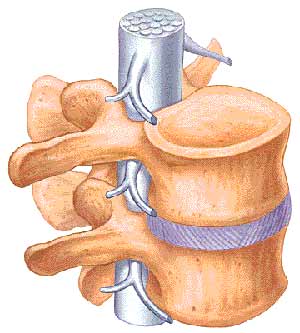 Back specialists sometimes look at a spinal segment to understand and explain how the whole spine works. A spinal segment is made up of two vertebrae attached together by ligaments, with a soft disc separating them. The facet joints fit between the two vertebrae, allowing for movement, and the neural foramen between the vertebrae allow space for the nerve roots to travel freely from the spinal cord to the body.

Each spinal segment is like a well-tuned part of a machine. All of the parts should work together to allow weight bearing, movement, and support. When all the parts are functioning properly, all spinal segments join to make up a remarkably strong structure called the spinal column. When one segment deteriorates to the point of instability, it can lead to problems at that segment causing pain and other difficulties.

Now that you know the parts of the spine, let us look at the spine itself, which has three main segments - the lumbar, thoracic, and cervical spines.

The lowest part of the spine is called the lumbar spine. This area has five vertebrae. However, sometimes people are born with a sixth vertebra in the lumbar region. The base of your spine (sacrum) is a fusion of many bones, and when one of them forms as a vertebra rather than part of the sacrum, it is called a transitional (or sixth) vertebra. This occurrence is not dangerous and does not appear to have any serious side effects.

Low back pain is a very common complaint for a simple reason. Since the lumbar spine is connected to your pelvis, this is where most of your weight bearing and body movement takes place. Typically, this is where people tend to place too much pressure, such as: lifting up a heavy box, twisting to move a heavy load, or carrying a heavy object. Such repetitive injuries can lead to damage to the parts of the lumbar spine.

The thoracic spine is made up of the middle 12 vertebra of the spine. These vertebrae connect to your ribs and form part of the back wall of the thorax (the ribcage area between the neck and the diaphragm). This part of the spine has very narrow, thin intervertebral discs, so there is much less movement allowed between vertebrae than in the lumbar or cervical parts of the spine. It also has less space in the spinal canal for the nerves. The thoracic spine's curve is called kyphotic because of its shape, which is a regular "C"-shaped curve with the opening of the "C" in the front.

Unlike the rest of the spine, there are special openings in each vertebra in the cervical spine for the arteries (blood vessels that carry blood away from the heart), as well as the spinal canal that carries the spinal cord. The arteries that run through these openings bring blood to the brain.

Two vertebrae in the cervical spine, the atlas and the axis, differ from the other vertebrae because they are designed specifically for rotation. These two vertebrae are what allow your neck to rotate in so many directions, including looking to the side.

The atlas is the first cervical vertebra - the one that sits between the skull and the rest of spine. The atlas does not have a vertebral body, but does have a thick forward (anterior) arch and a thin back (posterior) arch, with two prominent sideways masses.

The atlas sits on top of the second cervical vertebra - the axis. The axis has a bony knob called the odontoid process that sticks up through the hole in the atlas. It is this special arrangement that allows the head to turn from side to side as far as it can. Special ligaments between these two vertebrae allow a great deal of rotation to occur between the two bones.

Though the cervical spine is very flexible, it is also very much at risk for injury from strong, sudden movements, such as whiplash-type injuries. This high risk of harm is due to: the limited muscle support that exists in the cervical area, and because this part of the spine has to support the weight of the head. This is a lot of weight for a small, thin set of bones and soft tissues to bear. Therefore, sudden, strong head movement can cause damage.

Back to Patient Guides