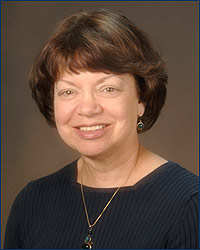 In February of 1998, Marsha Reichman underwent a partial glossectomy for tongue cancer. Eight years later she is doing well and says “I am very grateful that I was recommended to Dr. Robert Ord, Chief and Professor, Oral-Maxillofacial Surgery, and feel that is why I am still here. I think Dr. Ord is a phenomenal surgeon, and the best physician for treatment of oral cancers.” Read her story below.

What was your disease/condition?

I had a stage III cancer of the tongue. It was on the right side of the tongue at the edge about halfway back.

When/how were you diagnosed?

My tongue started bothering me, as if I had bitten it. When it didn’t go away I saw an ENT specialist who prescribed an ointment, but warned me not to let it go if it did not get better soon. I also saw an oral surgeon who did a biopsy after I had used another medication for a week (I did not want to have a biopsy right away). He called me on a Sunday morning to come in and discuss the results -- clearly a bad sign.

What led up to your decision to have surgery?

My tongue had a profound reaction to the biopsy. The right side where the lesion was became inflamed and swollen. It was also painful if it hit my teeth so I was having trouble talking and eating on that side of my mouth. When I got the diagnosis and spoke with Dr. Ord it was clear that the cancer had to be treated and surgery was recommended. Also it seemed to me that part of my tongue was just not going to be functional again. I liked surgery much better as a treatment option than radiation without surgery. I wanted to have the surgery as soon as possible.

How did you find out about the University of Maryland Medical Center and Dr. Ord?

The oral surgeon who did the biopsy recommended Dr. Ord very highly. Dr. Ord had treated his aunt for a salivary gland tumor. His aunt was a particularly important person to him since she introduced the oral surgeon to his wife of many years.

When did you have your surgery?

I had my surgery early on a Thursday morning in February of 1998, about a week and a half after I first saw Dr. Ord. Dr. Ord's office was extremely helpful in arranging all of the appointments that were needed before the surgery. They coordinated these appointments, making it possible to have the surgery so quickly.

I remember coming out of anesthesia and thinking that I really did not have any pain so the surgery could not have been performed yet. I stayed overnight in recovery with a breathing tube. I was in a semi-private room on the oncology ward for about three or four additional days. I think my recovery was routine except that I had some accumulation of fluid that Dr. Ord removed. I have little scarring or marks from the surgery considering the size of the tumor and the number of lymph nodes (32) examined.

Did the illness and subsequent surgery end up affecting your speech?

Although I saw a speech therapist several times there was relatively little effect on my speech, just some problems with s and t. The exercises included things like practicing "seashells." I also did tongue exercises to regain complete control of moving my tongue.

Did you have additional treatments/therapies after surgery?

I also had radiation treatment which had more long term effects. I have xerostomia (dry mouth), for which I take medication and was careful during radiation to do a lot of neck exercises to prevent loss of mobility. I had problems with eating for some period of time which required a lot of adjustment. Dr. Ord and his fellows were very helpful in suggesting the medication that I am taking for xerostomia. I think starting the medication before radiation treatment began helped minimize the effects of dry mouth which have not been as severe as expected -- although I do spend a lot of time, much more than I did before, taking care of my teeth and mouth

How did you feel about the care you received while you were in the hospital?

The care I received was fantastic. I was able to speak with Dr. Ord and others involved in the surgery just prior to the surgery which made it much more personal, more comfortable and gave me more confidence and allowed me to relax. Dr. Ord had spent a lot of time answering questions I had prior to the surgery so that made me very comfortable as well. The nursing care I received was terrific. I also got information on a speech therapist and nutritional therapist who I contacted after leaving the hospital.

During my radiation treatment at UMMC, my experience with the physicians there -- the radiation technologists, the nurses and other staff -- was also great. I went back recently for a follow-up and, from the interactions with other patients that I observed, and with me, realized I had forgotten how wonderfully patients are treated and how kind, friendly and nice the staff is. Everyone involved was very helpful so that I gained confidence during the first part of the treatment that made it a better situation for me.

Dr. Ord's office recommended a dentist specializing in treating patients undergoing radiation that I saw before radiation treatment, during treatment and for a number of years afterwards. Although she is no longer there, I still get my dental care at the faculty practice.

I saw Dr. Ord, of course in the hospital, but also soon after leaving the hospital, which was great since he answered questions that I had. I started radiation treatment within six weeks of surgery. Dr. Ord saw me frequently during the first year after surgery and radiation; every month and then every two months. I think this was very important because he would have caught a recurrence quickly had it occurred.

How has your life changed since surgery?

I think recovery from the surgery was pretty easy. There are more long term effects from the radiation treatment, mostly xerostomia or dry mouth. It is now more than eight years since the surgery and radiation treatment. I have few problems eating, which has been the case for a number of years, and lead a very normal life. I am very grateful that I was recommended to Dr. Ord and feel that is why I am still here. The whole process made me appreciate many aspects of life more than I had before.

What is your opinion of Dr. Ord?

Dr. Ord is a phenomenal surgeon and I feel lucky that he was recommended to me. I have complete confidence in his medical knowledge and advice. In addition to this, Dr. Ord also treats his patients very much as individual people. He has always answered all of the questions that I have, and I have had many, never making me feel that they were stupid. My surgery was about six hours with I think a break while they waited for pathology results. My husband commented that he was the only person in the waiting room where the surgeon came out to let him know what was happening during this time. When I have had questions I have been able to reach Dr. Ord by phone to get information from him or one of his fellows. His office is also organized to make all aspects of treatment easy for his patients. The office staff is amazing helpful and friendly. Even though I am not there frequently any more I always feel that they remember me.

Would you recommend UMMC/Dr. Ord to others and if so why?

I would definitely recommend UMMC and Dr. Ord to others and in fact have done so. Basically I think Dr. Ord is the best physician for treatment of oral cancers. The treatments are complex, with side effects, and I feel that the way in which he treats patients maximizes their quality of life both while treatment is underway and afterwards.