Taking Treatment & a Half Marathon, Together, One Step at A Time

The relationship between a cancer patient and their care provider is a special one. Between radiation therapy appointments, hours of chemotherapy, and even sometimes surgery and recovery, there's not much that can strengthen this bond, besides running a half marathon.

But Tiffani Tyer, a nurse practitioner in Radiation Oncology at the University of Maryland Greenebaum Comprehensive Cancer Center (UMGCCC), and Dana Deighton's journey started long before this year's Maryland Half Marathon & 5K.

About 3 years ago Dana was diagnosed with stage IV esophageal cancer. At 43 years old with 3 young children, it was, in Dana's words, "unfathomable." She traveled up and down the East Coast looking for a treatment plan that would give her the most hope. Many acted like she was naïve and unrealistic for even seeking out treatments beyond palliative chemotherapy.

After much deliberation, Dana settled on a plan of 8 cycles of chemotherapy at one local hospital. During this treatment, a friend introduced Dana to Mohan Suntha, MD, a radiation oncologist at UMGCCC.

Within an hour of getting Dana's information, Dr. Suntha gave her a call. While he agreed the appropriate preliminary step was chemotherapy, he did not close the door on her like many others. Dr. Suntha and Dana continued to check in with each other throughout her chemotherapy treatments to see how things were going.

In December 2013, after Dana finished chemotherapy, she learned she would not be considered for radiation or surgery by the hospital where she was initially treated. She was told that the data did not support it. She was devastated. Dana returned to UMGCCC, where Dr. Suntha and Tiffani were always willing to reassess her situation and provide guidance when obstacles seemed insurmountable. Knowing that every case is different, he agreed to reevaluate her.

After careful consideration and determining that her distant disease had indeed resolved, he offered her local treatment with chemotherapy and radiation targeting the primary site in her esophagus. While the local treatment helped, the primary site still showed evidence of persistent disease at the end of her treatment. To try to avoid major thoracic surgery, an endoscopic mucosal resection was attempted, but was unfortunately unsuccessful. Dana was again devastated. She felt like it was just another blow to her journey to health and she was running out of options. 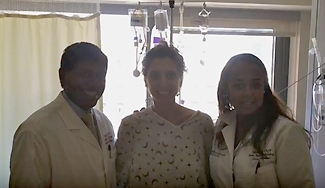 Dr. Suntha and Tiffani encouraged Dana to stay hopeful. They agreed along with many other providers that indeed she was in a difficult position. After many tumor board discussions and repeat imaging studies to confirm her extent of local disease thoracic surgeon Whitney Burrows, MD, was consulted. He discussed surgical salvage to address her only site of cancer. Albeit risky, with no guarantee of a survival benefit, it was her only remaining local treatment option. Recognized as a long shot with a real possibility of acute complications related to such a long and complicated surgery, she willingly consented to undergo the esophagectomy. From Dana's view the benefit far outweighed the risk. She believed in her team and her surgeon, whose expertise is well established in post chemoradiation patients. It proved to be a good choice and offered a huge reward. Dana recovered well and was cancer free and feeling great–until July 2015.

It was then that a routine interval scan revealed a new lymph node mass in her Axilla (near the armpit) was biopsied and confirmed to be recurrent esophageal cancer. Dana had resigned herself to more draining rounds of chemotherapy after another surgery could not remove all of the cancer. But again, Dr. Suntha, Tiffani, and medical oncologist, Dan Zandberg, MD, always made sure all options were presented and considered.

Dana's case was represented to their colleagues at a tumor board meeting on the Friday before she was supposed to start chemotherapy. Drs. Suntha and Zandberg called her that evening to recommend immunotherapy, which harnesses the power of a patient's immune system to fight cancer. After a sleepless night, Dana agreed. She now receives treatments of Nivolumab every 2 weeks for at least a year.

Dr. Suntha has always recognized that there's something unusual about Dana's case, and has often asked, "Is there something different about her biology? We don't know."

Dr. Suntha also believes that Dana's strong will and clear ability to advocate for herself has facilitated part of the success of her care.

Throughout these three years, Dana describes herself as lucky enough to continue her usual regimen of walking, running, and exercising consistently. She donated money to the Maryland Half Marathon & 5K to fund cancer research in the past, but feeling much healthier and up to a new challenge, she promised to run it in 2016.

She has always ran 10 miles in her hometown of Alexandria, Virginia, but knew those three extra miles of hills in the Half Marathon would be challenging.

Despite her reservations, in a partnership with Tiffani, the Radiation Oncology Greene Street Dream Team was born. On May 14th, Tiffani and Dana ran the entire race together (even though, according to Dana, Tiffani could've run circles around her). To date, they've raised more than $10,000. They've taken every step together in cancer treatment and every step in the half marathon & 5K – a true bond that will continue.