Emphysema is a chronic obstructive disease of the lungs. The lungs contain millions of tiny air sacs called alveoli. In emphysema, the sacs lose their elasticity and air becomes trapped in the sacs. It becomes difficult to expel oxygen-depleted air from the lungs. So the normal exchange of new and used air is diminished. Emphysema is classified as a chronic obstructive pulmonary disease (COPD).

Emphysema develops due to smoking cigarettes, inhaling toxins or irritants, or from Alpha1-antitrypsin deficiency (A1AD), a genetic defect which can cause emphysema at an early age in non-smokers

A risk factor is something that increases your chance of getting a disease or condition.

As the disease progresses, patients may experience:

The doctor will ask about your symptoms and medical history, and perform a physical exam. 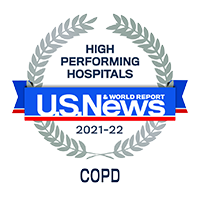