For more than 20 years, Catonsville resident Mike Schumann worked on the chain crew for the Baltimore Ravens (managing the signal poles on the sidelines), a job that kept him on his feet and running for hours at a time. For years, because of his love of the game and his beloved hometown team, he’d pushed through the pain, getting several knee injections that only allowed temporary relief. “I’ve always felt pain,” Mike says, when referring to his time on the field.

As he approached age  67, and faced with the delayed the NFL season and ever-increasing knee pain, Mike decided to refocus his passion and opted to “crew” for the local high school football teams instead. Almost immediately, his plan was derailed when, during the first play of the game as he moved to mark the down, “I couldn’t run at all,” he says. “I couldn’t walk or move.” Physicians that he’d known during his time with the Ravens—doctors who had helped nurse his knee along with injections for all those years—finally told him: “It’s not going to work anymore.”

Faced with the prospect of surgery, Mike started formulating a plan to help relieve his knee pain and get him “game ready” once again. After careful research, he found orthopedic surgeon David Dalury, MD, chief of orthopedics for UM St. Joseph Medical Center and head of Towson Orthopeadic Associates, who determined that both of Mike’s knees needed to be replaced.

To decrease the risk of complications, the surgeries were scheduled two weeks apart, on March 14 and March 28—the day after Mike turned 69—using VELYS™ Robotic-Assisted Technology. His surgeries and recovery went according to plan, and, according to Mike, “were a wonderful experience.” Recovery was smooth and rapid following both procedures, “a winning combo,” Mike calls it. “My surgery was on a Monday. Two days after surgery, I was able to use a walker. On Friday, I started physical therapy and, by then, hardly needed to use a cane.” Incredibly, and after so many years of pain and limited mobility, “I was able to fully flex my leg—with no pain—within just a month.”

Even his physical therapists were impressed by the speed of Mike’s recovery and return to full mobility. “They told me I was the second patient they’d ever seen to recovery from knee replacement so quickly,” Mike says. While in therapy, he’d seen patients who were still in pain and still not walking without assistance, while he was cycling on reclining bike and taking the stairs foot-over-foot.

This convinced Mike even more strongly that robotic surgery with Dr. Dalury was the right—and long overdue—decision. “I knew beforehand that Dr. Dalury was an expert at robotic surgery,” Mike says, but he gave little thought to how much of a difference the VELYS technology could make on his quality of life. “I did my research…I understood that robotic surgery was better and meant more accurate  placement of the knee joint, which would mean I could heal faster and be in less pain. And when Dr. Dalury assured me that this was the best plan of treatment for me, I knew he was right.” Having never had a knee replacement surgery before, Mike admits had no idea that the results would be so phenomenal—and mean an end to his pain and limited activity. “When I came out of my first surgery, Dr. Dalury said it was a success,” he says. “After my second surgery, he told me that by Memorial Day, I wouldn’t even remember I’d had a knee replacement…and he was absolutely right.” An added bonus: Today, Mike literally stands taller, thanks to his knee replacement surgery, and his bow-leggedness was also corrected.

Now retired as a  Ravens chain crew member and from his active job as head of IT at CCBC Catonsville, Mike and his wife Betty, have no plans to slow down. “I feel wonderful,” he says. In 2019, Mike and Betty vacationed in England, and, since he’s had his knee replacement, Mike now realizes how much he sat out during the trip. “Every day, all the things we wanted to do were cut short because I couldn’t walk…My wife and friends took the Tower of London stairs, and I just sat.”

As far as he’s concerned, the field is wide open again. The couple looks forward to traveling overseas, taking long walks at Longwood Gardens…and, of course, cheering on their beloved Ravens again. After enduring the long isolation of COVID  and the pain and limitations he experienced before his surgery, Mike is ready to face life again. When asked what he wants to do next, he answers like a champ—full of heart and without skipping a beat: “Everything,” he says. “Everything.” 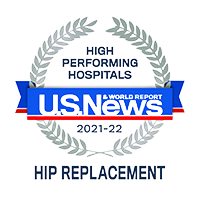 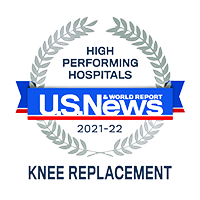