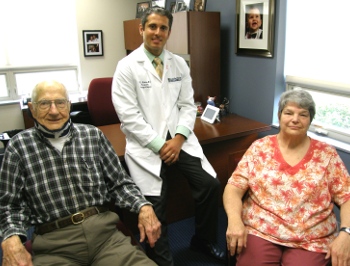 Jim Carter, a retired corporate attorney, and Lois Krum, a retired respiratory therapist, of Easton met through an online dating service and married later in life. The Easton couple planned an active retirement focused on volunteerism in their community. Instead, they found themselves suffering from severe spinal issues that were affecting the quality of life they had worked so hard to attain.

While Carter, age 85 and Krum, age 71, suffered from very different spinal issues – he had sacral chordoma (cancer of the tailbone) and she had a cervical spine injury from years ago – both were in constant pain and unable to get around. Carter heard about the successes of local neurosurgeon Khalid Kurtom, MD, of Chesapeake Neurological Surgery in Easton and decided to contact him about his pain issues. He encouraged his wife to do the same.

Their treatments with Dr. Kurtom changed their lives.

Dr. Kurtom recalls, “When Mr. Carter came to me, he had a complex problem. Because of the cancer’s location in his sacrum, it would be a risky operation to remove the affected bone and not compromise the stability of his pelvic area and damage the nerves going to his legs, bowel and bladder. His major issue was the severe pain he was experiencing. Because the pain medications he was taking were disorienting him, we had to identify an alternative treatment to relieve his pain.”

Carter wanted to try an experimental treatment using a spinal chord stimulator. The stimulator had been used primarily for patients with unknown pain source, not for pain related to tumors. The stimulator functions by jamming the pain signal traveling up the spinal cord to the brain. Dr. Kurtom agreed to a trial use of the stimulator to see if the treatment could help Carter.

Carter comments, “I didn’t want to go on living facing the pain I faced every day. Now, I am on minimal pain medications and am able to function in my every day life. I take an oral chemotherapy drug daily to slow the growth of the cancer.”

Dr. Kurtom adds, “This treatment has gone beyond what I expected it to do in giving Mr. Carter some quality of life back.”

Lois Krum’s spinal issues were more complex. Over the last 30 years, she had several surgeries on her neck, spine and shoulder after two automobile accidents in the 1980s and 1990s. In 2011, she developed difficulty walking and was confined to a wheelchair.

“Everything was a challenge. I never knew when I was going to fall,” Krum says. “I didn’t feel good about how I looked. Because my head was not supported, I looked like a freak. Frankly, I was suicidal and felt I had come to the end.”

In March 2012, after encouragement from her husband, Krum decided to see Dr. Kurtom. She had a fractured vertebra in her upper spine that caused a dislocation and compression of the spinal cord. This exaggerated the flexed appearance of her neck and she was unable to walk with her head up.

Dr. Kurtom performed an extensive operation. In addition to decompressing the spinal cord, he removed the broken vertebra and replaced it with a titanium cage. The surgery also involved a reconstruction of the spine with rods and screws connecting above and below to her old fusion. The reconstruction also restored her spinal alignment.

Dr. Kurtom comments, “This was a difficult operation because of the multiple surgeries and different hardware Lois had in her spine, the spinal cord compression and the degree of deformity in her neck. There is a remarkable difference between the preoperative and postoperative x-rays and her exam. She looks great now.”

Dr. Kurtom adds, “The success of this operation relies on an entire team of dedicated people and requires a great deal of dedication and commitment from the patient.”

Recalling his wife after surgery, Carter states, “I could see immediate improvement as soon as Lois woke up from surgery. Her back was straightened and she could hold her head upright. It was remarkable.”

Krum has regained her ability to walk again and takes fewer pain medications. She is using a bone growth stimulator to encourage bone growth in her spine.

“When I woke up from surgery, the pain was immediately gone,” says Krum. “I can now walk with a cane and I am finally sleeping again at night. I wake up looking forward to each new day and am enjoying life again!”

With a new lease on life, both Carter and Krum look forward to traveling and doing volunteer work again. Krum adds, “Dr. Kurtom has given us a sense of rebirth – an enthusiasm about being alive.”

Dr. Kurtom has practiced in Easton since fall 2010 and specializes in brain and spinal tumor management as well as minimally-invasive spinal surgeries. For more information or to make an appointment, call 410-820-9117 or visit www.cnseaston.com.