Sisters Tatum and Kathleen Crouch of Easton have shared a lot of similarities while growing up. Only a year apart in age, the sisters have shared schools, friends, a passion for lacrosse and now, the same orthopedic surgeon, Richard Mason, MD, of The Orthopedic Center in Easton, a partner of University of Maryland Shore Regional Health.

In an unlikely and unhappy coincidence during the summer of 2016, both Tatum and Kathleen tore their anterior cruciate ligament (ACL) while playing in a weekend lacrosse tournament in Bel Air, Maryland. Dr. Mason performed ACL reconstruction surgeries for both girls one week apart.

The ACL is a band of tissue that helps stabilize the knee. Important for athletes who need to make quick and sudden changes in direction, it is a common sports injury, especially and prevalent for young female athletes. According to Dr. Mason, in the last 15 years there has been a dramatic increase in girls between the ages of 14 and 18 who suffer torn ACLs.

“During the time  a female  is maturing, the natural build of her body makes it hard for her to properly cut, jump and pivot  without rotating her knee, putting more stress on the ACL,” says Dr. Mason. “It is important that young athletes, especially girls, learn through their training how to properly make these maneuvers without overloading the knee.”

The Crouch sisters were playing on the Maryland United Lacrosse Club. Tatum, then 16, played on the U18 team while Kathleen, then 15, was on the U16 team. In separate incidents just a day apart, both sisters tore their ACLs. Once home from the tournament, their mom, Erin Crouch, reached out to The Orthopedic Center to have the girls seen by Dr. Mason.

“We are very familiar with Dr. Mason because of the work he does in the community with high school and recreational sport athletes,” said Erin. “It was frightening to have two of our children go down in the same weekend with knee injuries, but we had confidence in Dr. Mason and The Orthopedic Center to put together a plan to get them back on the field.” 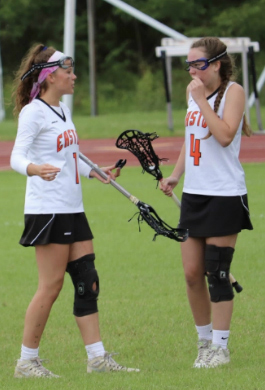 Kathleen was not as sure about the extent of her knee injury, even days after the tournament had ended. “My knee was sore, but because of what Tatum was going through, I didn’t think there was any way possible I had suffered the same injury, on the same weekend,” said Kathleen. “I attempted to play again early that same week, and when my knee buckled for the second time, I knew there was something more serious going on.”

The Crouch sisters were seen by Dr. Mason at The Orthopedic Center, who determined they both needed ACL reconstruction surgery with extensive rehabilitation. In Kathleen’s case, the meniscus also was torn, which Dr. Mason says is not uncommon.

“Around 85 to 90 percent of ACL injuries include some other sort of tear in the secondary stabilizers of the knee,” says Dr. Mason. “When other injuries have to be repaired along with the ACL, it is even more imperative for patients to rehabilitate their knee so that they do not lose mobility or function later on in their life.”

After surgery, both Tatum and Kathleen had six weeks of recovery followed by six months of one-on-one rehabilitation and training programs. According to Dr. Mason, it is recommended that young athletes follow a strict rehabilitation schedule with a specialist to build their knee strength and also to learn about how to properly build up certain muscles to minimize the chance of reinjuring the knee.

“Before returning to contact sports, the injured athlete should have 90 to 95 percent of the strength he or she had prior to their ACL injury,” says Dr. Mason. “If you don’t have that, it is recommended that you continue the rehabilitation and exercise training until that strength level is reached.”

Tatum, now graduated from Easton High School, and Kathleen, a senior, both resumed playing lacrosse this past spring. Kathleen is looking forward to playing on the EHS team once they begin practice in early 2019. Tatum, who unfortunately suffered a torn ACL on her other knee this past spring, shares her sister’s determination to get back in the game. With the help of Dr. Mason and The Orthopedic Center, she completed a second round of surgery and rehabilitation and began her first year at Savannah School of Art and Design in Savannah Georgia, whose women’s lacrosse team begins a 13-game schedule in early February.

For more information or to make an appointment at The Orthopedic Center in Easton or Queenstown, call 410-820-8226 or visit www.theorthopediccenter.net.