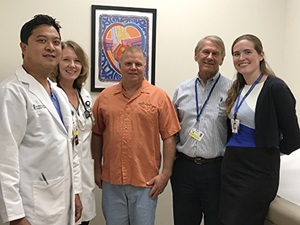 The five-mile drive across the Chesapeake Bay Bridge is considered by some to be a terrifying experience and the iconic structure has even been coined the ‘scariest bridge in America’ in a number of news stories and on entertainment shows. Imagine experiencing a cardiac episode mid-way across the Bridge – a bridge traveler’s worst nightmare. That very thing – a syncopal episode – happened to Cordova resident Tom Eason when he and his wife, Martha, were traveling across the west-bound span in March, 2015.

We were headed out of town on vacation and while crossing the Bridge, Tom blacked out,” Martha recalls. With nowhere to pull over in the midst of traffic, she quickly grab the wheel, guiding the car until they could safely stop the car once across. She then dialed 911 and her husband was taken by ambulance to an area hospital. Tests in the emergency department revealed nothing significant; it was determined the episode was caused by low glucose levels and Tom was released.

Eason went about his normal activities, but several weeks later, experienced another episode. “I just knew that something wasn’t right – something felt off,” he says. This second go around, he sought treatment in the Emergency Department at University of Maryland Shore Medical Center at Easton, where he was assessed by R. Bruce Helmly, MD, cardiologist with UM Community Medical Group – Cardiology.

A pacemaker is a small device implanted into a patient’s chest that stabilizes heart rhythms by using electrical pulses to simulate a normal heart rhythm. During Eason’s procedure, Dr. Remo placed an MRI-compatible dual chamber permanent pacemaker system. A dual chamber pacemaker system has one lead in the right atrium – the top right chamber of the heart that receives blood coming back to the heart – and one lead in the right ventricle – the bottom right chamber of the heart that pumps blood out of the heart.

“Left untreated, conditions like sick sinus syndrome result in the heart’s inability to function properly,” explains Dr. Remo. “As a result of this arrhythmia, the heart may not be able to pump adequate amounts of blood to the brain and body, causing symptoms such as fatigue, shortness of breath and fainting. In extreme cases, it can lead to loss of consciousness or even death.”

This past spring, an echocardiogram found that Eason’s ejection fraction – the amount of blood leaving the heart’s ventricles each time it contracts – was abnormal, demonstrating systolic heart failure – reduced pumping functionality of the heart.

While Eason did well with the original pacemaker system for two years, it was decided that his pacemaker system needed to be upgraded to a biventricular system, in which a third lead is added to the left side of the heart. “Biventricular pacemakers send small electrical impulses through the leads and behave more like the heart’s intrinsic electrical conduction system,” says Dr. Remo.

Dr. Remo and his team felt an MRI-compatible system would be the best device for Eason’s condition as it would not only improve the patient’s cardiac function, but would also best fit his lifestyle as an active man with a long life expectancy. “Given Mr. Eason’s young age, the likelihood of him needing an MRI scan at some point in his life is pretty high as they are used to diagnose a number of conditions affecting the brain, peripheral nervous system, and muscles,” says Dr. Remo.

Eason was a candidate for a biventricular device recently developed and released by Medtronic, a medical device company with expertise in technologies that manage cardiac arrhythmias and heart failure. The device selected for Eason is part of the first FDA-approved portfolio containing three models of MRI-compatible cardiac resynchronization therapy pacemakers (CRT-Ps). Unlike patients with traditional biventricular pacemakers, patients who receive the new MRI compatible CRT-Ps are also able to receive MRI scans, which can help diagnose other health conditions.

According to Dr. Remo, MRI scanners use large magnets that can interfere with a non-compatible system’s function. “These new CRT-P devices developed by Medtronic enable medical providers to better manage complex heart conditions while also making it possible for patients to receive MRI scans when necessary,” he says.

On July 20, Eason became the recipient of an MRI-compatible biventricular pacemaker with Dr. Remo performing the procedure. According to Medtronic, it was the first of its kind to be implanted in the state of Maryland.

“This new, state-of-the-art pacemaker will not only help Mr. Eason’s heart to pump more efficiently, sustaining adequate circulation to his body’s organs and tissues, it should greatly improve his quality of life and his overall health in years to come. It’s also a comfort that his device allows for any diagnostic MRI scanning that may be needed in the future,” comments Dr. Remo.

Neither Dr. Remo nor his team members had knowledge that they were implanting the first MRI-compatible biventricular pacemaker system in all of Maryland. As Remo explains, “Our number one priority was to provide our patient with the optimal system available. The fact that he was the first in the State to receive this device is an honor for my team and me, especially given the larger academic medical centers in Maryland. We take great pride in our ability to offer Eastern Shore residents such innovative technologies, right here in our community hospital.”

“I had no idea until after the procedure that I was the first person in all of Maryland to receive this type of cardiac device,” remarks Eason. “I cannot adequately express how grateful I am to have been able to receive such innovative health care so close to home, practically in my back yard.”

Martha adds, “It meant a lot to my family and me to be able to be at the hospital during the procedure and visit with him afterward, without having far to travel.”

Speaking about Dr. Remo and his team – nurse practitioner Patricia Lancaster, device nurse Dawn Ament, and electrophysiology lab nurses and technologists – Eason comments, “I have all the confidence in the world in this team – my home team. Thanks to them, I’m feeling fantastic and have returned to an active lifestyle at work, I’m boating and am simply enjoying life!”

Information about cardiovascular services offered at UM Shore Regional Health can be found at UMShoreRegional.org. Patients can learn more about cardiology and electrophysiology services provided by Dr. Remo and his team by calling the UM Community Medical Group – Cardiology practice at 410-822-5571.