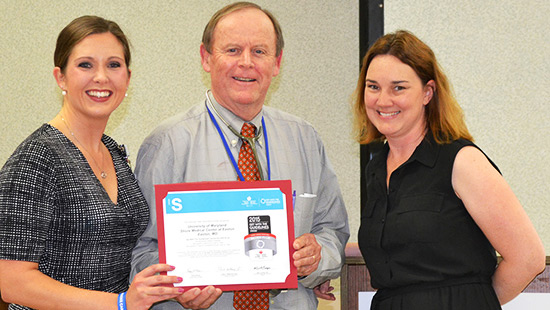 Stroke – a disease that affects the arteries leading to and within the brain – is the number five cause of death in the United States and according to the American Stroke Association, a leading cause of disability. To recognize signs and symptoms of stroke, it is recommended that people remember the word “FAST” – Facial drooping; Arm weakness; Speech difficulty; and if any of these symptoms are present, Time to call 9-1-1 as immediate medical attention is necessary.

When in need of prompt care for stroke, residents of the five-county region served by University of Maryland Shore Regional Health have access to a designated Primary Stroke Center at UM Shore Medical Center at Easton.

A Primary Stroke Center designation is given by the Maryland Institute for Emergency Medical Services Systems (MIEMSS) when standards are met to support better outcomes for stroke care. Certification standards include having a dedicated stroke-focused program, staffed by specially trained medical professionals – 24 hours a day, 7 days each week – who provide expedited diagnostic services and stroke care.

One of the key components of the Primary Stroke Center in Easton is its ability to offer, when appropriate, Intravenous Thrombolytic Therapy with the clot-buster tissue plasminogen activator, Alteplase, the only drug approved by the U.S. Food and Drug Administration to treat ischemic stroke. Administered through an IV in the arm, Alteplase works by dissolving the obstructive clot and improving blood flow to the part of the brain being deprived of blood flow. If given in the first three hours after the onset of stroke symptoms, Alteplase has been shown to significantly reduce the effects of stroke and lessen the chance of permanent disability.

The Primary Stroke Center at UM Shore Medical Center at Easton was recently awarded the AHA/ASA Get With The Guidelines® Silver Plus Achievement Award. According to the ASA, this award is given to hospitals that have reached an aggressive goal of treating patients with 85 percent or higher compliance to core standard levels of care as outlined by the AHA/ASA for 12 consecutive months. In addition, hospitals with this designation have demonstrated 75 percent compliance to seven out of ten stroke quality measures during the 12-month period.

In conjunction with this award, Easton’s Primary Stroke Center also achieved the Target Stroke Honor Roll for the Get With The Guidelines Stroke® Program. To qualify for the Target recognition, hospitals must meet quality measures developed to reduce the time between a patient’s arrival at the hospital and treatment with Alteplase. In this case, UM Shore Medical Center at Easton demonstrated its ability to deliver the drug in 60 minutes or less in 50 percent or more of the patients receiving the treatment.

“Stroke occurs when a blood vessel that carries oxygen and nutrients to the brain is either blocked by a clot or ruptures,” Fluharty remarks. “When that happens, part of the brain cannot get the blood and oxygen it needs so vital brain cells begin to die. Our team lives by the premise that time lost is brain lost, making it imperative for patients to seek treatment for stroke at the first sign or symptom and driving us to diagnose and offer treatment to our patients as quickly, and safely, as we can.”

“It is a tremendous honor and a privilege to be a part of this team,” says Terry Detrich, MD, local neurologist and Medical Director of the Primary Stroke Center. “We would not be successful in our efforts to provide high-quality stroke care without the collaboration of our local Emergency Services teams, Emergency Department physicians, nursing staff and all of the other medical professionals who are vital to patient outcomes.”
He adds, “It just goes to show what can be done when you have a team of medical professionals that is committed to offering the very best in patient care.”

“Our highly skilled medical providers and clinicians strive to make our organization the region’s leader in patient-centered care,” says Ken Kozel, president and CEO, UM Shore Regional Health. “We take great pride in the Stroke Center’s recent accolades from the American Stroke Association as they are tangible proof that our team is offering the region’s stroke patients the best possible care when it is needed at the most critical time.”

Additional information about the Primary Stroke Center at University of Maryland Shore Medical Center at Easton can be found at UMShoreRegional.org/stroke.

As part of the University of Maryland Medical System (UMMS), University of Maryland Shore Regional Health is the principal provider of comprehensive health care services for more than 170,000 residents of Caroline, Dorchester, Kent, Queen Anne’s and Talbot counties on Maryland’s Eastern Shore. UM Shore Regional Health’s team of more than 2,500 employees, medical staff, board members and volunteers works with various community partners to fulfill the organization’s mission of Creating Healthier Communities Together.