Christine Brittingham, operating room coordinator at UM Shore Medical Center at Chestertown, was recently honored by local doctors as recipient of 2016 Margaret Ann Gary Nursing Award. The award was presented at a luncheon attended by more than 40 physicians and hospital staff on June 29.

The annual award was established in 2011 by the local Chestertown medical staff as a way for physicians to recognize, reward and thank an outstanding member of the hospital nursing staff. This year, nine nurses at the Chestertown hospital were nominated: Brittingham, Oriane Bowers, Eileen Brooks, MaryAnn Chrisophel, Jen McCracklin, Jenn Nutley, Mike Parker, Sarah Postles and Annette Waltrup.

“The award was created and named in honor of Margaret Ann Gary, RN, who embodied nursing excellence in our community,” said Michael Peimer, MD, co-chair of this year’s selection committee. “Margaret Ann was both a leader and a mentor for her peers and colleagues during her many years of service here.”

“It’s an honor to be nominated for this award,” adds David Knutson, MD, a retired nephrologist who co-chaired this year’s selection committee. “Any nurse can be nominated but the selection committee has favored candidates who are bedside nurses because they are the ones who work hand in hand with the doctors. This year, Chris was the obvious winner because she was nominated by multiple doctors. She will decidedly be missed when she retires at the end of this year.”

During the award presentation, Dr. Knutson noted that Brittingham’s nominators commended her for her strong work ethic, competence, knowledge, flexibility, resilience and the wide respect she has earned from her colleagues.

Brittingham began her health care career in 1967 as a part-time nurses’ aide at the Chestertown hospital while she was still in high school. She became an LPN and worked first in the Emergency Department and subsequently in the Operating Room. After earning her RN, she advanced to become manager for the OR and Sterile Processing; she is now looking forward to retirement at the end of 2016. 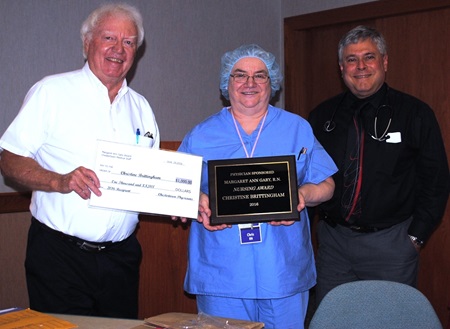