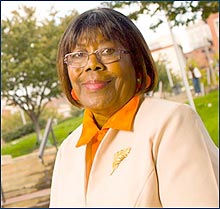 Summary: Sarah Chisholm had multiple medical problems -- in addition to obstructive sleep apnea, she also had GERD and Zenker's diverticulum. She received care from multiple divisions at the University of Maryland Medical Center, including the University of Maryland Sleep Disorders Center, Otorhinolaryngology, and General Surgery. She was treated for sleep apnea, and had a Nissen fundoplication and Zenker's diverticulum repair. Below, Sarah talks about the multidisciplinary care she received at UMMC.

What were your medical problems?

I had acid (laryngeal and gastroesophageal) reflux disease and obstructive sleep apnea. In addition, I was overweight and had Zenker's diverticulum (a bulging of the esophagus that results in food becoming trapped).

What were your symptoms?

At first I was snoring very heavily. It was so loud I would wake myself up. Sometimes my husband said that it sounded like I wasn't breathing. When your breathing gets bad you get frightened. I would wake up and feel like I was not getting air -- I felt like I was going to die in my sleep. My tongue was swelling up at times. I was having a hard time and I often felt tired because I was not getting the proper amount of sleep.

What did you do next?

Before I went to the University of Maryland Sleep Disorders Center, I had problems swallowing and with food getting stuck in my throat. I went to the University of Maryland Medical Center's Division of Gastroenterology to get checked about my difficulty in swallowing. We talked about an operation. I told the doctor about my sleeping problem. The doctor suggested the Sleep Center and they also referred me to a UMMC hernia surgeon. But they said I needed to get my sleep problems taken care of and my weight under control before I could have the operations.

When did you visit the sleep center, and what happened there?

In June 2005, I went to see Dr. Steven Scharf (director of the UM Sleep Disorders Center and a professor of medicine at the University of Maryland School of Medicine) and he explained the program. He told me what it would consist of and how it would help me. After I decided I wanted to come in, I went in to get some tests done to see if I had sleep apnea.

I had two tests, which showed that I had a bad case of sleep apnea. They also said I was overweight and that I needed to get down to 180 pounds.

I went on a diet and lost 15 pounds, and I could tell the difference in my breathing. After seven months I lost all the weight I needed to.

During that time they also put me on a CPAP (Continuous Positive Airway Pressure) breathing machine, which I had to wear it when sleeping. It helped me to breathe well.

While on the CPAP I still had acid reflux, so I had the Nissen fundoplication operation for that. This allowed the inflammation to improve, which would then allow my Zenker's to be repaired later.

Once I lost weight I was able to get off the CPAP machine. They monitored and tested me and found out that I didn't need the machine anymore.

Did your treatment at the Sleep Center help you?

If you do what they tell you to do, it will work. It worked for me. I don't snore anymore and I no longer have any trouble breathing.

After your treatment at the Sleep Center, what happened next?

After I was treated at the Sleep Center, I had surgery to remove the Zenker's diverticulum pocket, which had grown in my throat from the acid reflux. It was a five-hour operation, and I stayed in the hospital for four days. The operation also helped with the sleep apnea.

What do you think of the care you received from the various doctors at the University of Maryland?

I feel really good now. I'm so glad I went to these doctors. The surgeons and the doctors at the Sleep Center all worked together. I think they are all fantastic, really great. It's so nice here. They are very concerned, and they make you feel like a whole person.