With treatment from the Center for Diabetes and Endocrinology at UMMC Midtown Campus, Tameka Harris is finally in control of her diabetes. 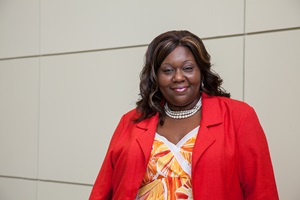 Diabetes isn't a disease for the complacent. Its management requires focus, dedication and a clinical team that is willing to work diligently until the disease is under control and the patient's quality of life is restored. Thankfully, 37-year-old Tameka Harris had all of the pieces to get her life back on track.

In 2005, while pregnant with her second child—one of the happiest times of her life—Harris developed gestational diabetes, a type of diabetes that develops during pregnancy and goes away after delivery. A year later she was diagnosed with type 2 diabetes. "Women who have diabetes during pregnancy are at a 50 percent risk of developing diabetes within the next 10 to 20 years," says Marjorie Pennant, M.D., an endocrinologist at the University of Maryland Center for Diabetes and Endocrinology.

Type 2 diabetes is the most common form of diabetes in the United States and worldwide. Unlike type 1, which typically is diagnosed in childhood or adolescence, type 2 diabetes is directly related to lifestyle choices such as weight gain, poor dietary habits and lack of physical activity. 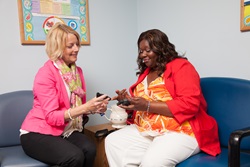 Harris was prescribed an antidiabetic drug, but it wasn't working well enough and her diabetes was getting worse over time.

Frustrated with the care she was receiving, she was referred to Dr. May Alattar, M.D., a board-certified endocrinologist at UMMC Midtown Campus.

"She started by giving me a thorough education on diabetes. I saw diabetes educators for nutrition and for medication management all in the same day," says Tameka.

"The main thing that helped Tameka, and what sets our center apart from others, is that an entire diabetes team takes care of patients, giving them all the tools necessary to help them take control of their disease," says Dr. Alattar. "With Tameka, her blood sugars were extremely high all day long. We made insulin dose adjustments and requested she send us her blood sugars on a daily basis until her blood sugars were finally controlled. Our diabetes educators were speaking with her on a weekly basis to identify which foods were causing her blood sugar to spike. The bottom line is, if you want to see results with your patients, you have to put in the effort. With Tameka, that meant daily contact."

Under the care of the diabetes team at UMCDE, Harris" A1c level went from 13 to 7 percent in under six months. After she was denied an insulin pump, UMCDE was able to work with her insurance company to get one. She no longer has to give herself insulin injections five times a day—the automated pump delivers insulin constantly and as needed with the press of a button. "The insulin pump allows me to live my life in a whole new way," Harris says.

"Before meeting Dr. Alattar and her team, my life was centered around my diabetes," Harris says. "I basically had to plan all of my activities around meal times and injections. Now, diabetes just fits into my life. It's still hard for me, but if you get a great diabetes team, take your meds regularly and keep the faith, you can get your life back," Harris says.