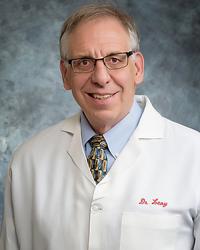 Dr. Levy has a long history of academic distinction in his medical career. He graduated from Case Western Reserve University (1971) and received his medical training at the University Of Pittsburgh School Of Medicine (1975). He completed his medical residency and endocrine fellowship at the Cleveland Clinic Foundation (1975–1980). While at Cleveland Clinic, his research focused on long-term follow-up of children and adolescents treated with radioiodine for Graves’ disease. He was Director of Endocrinology at Saint Thomas Hospital from 1980–1984. At that time he participated in endocrine teaching and was assistant Clinical Professor of Medicine at Northeast Ohio Universities College of Medicine (NEOUCOM), He was elected Teacher of the Year at Saint Thomas Hospital (1983). During this time, he was elected to the American Thyroid Association, the Endocrine Society, and the Fellowship in the American College of Physicians. From 1986–1993, he was in endocrine private practice with affiliations at Georgetown University Hospital, Washington Hospital Center, and several local hospitals. He served as the President of Prince George’s Chapter of the American Diabetes Association (1990). In 1993, he cofounded his own practice, Diabetes and Endocrine Consultants. Dr. Levy has published several medical papers in peer-reviewed journals and a presentation on Graves’ disease presented at the American Thyroid Association. He is Clinical Assistant Professor of Medicine at Georgetown University Hospital and participates with endocrine teaching at Washington Hospital Center. In recent years, he has focused on patient care. He was voted one of the area’s Top Doctors (Washingtonian Magazine) several times from 1991–2012, received the Patient’s Choice Award in 2008–2009 and 2012, and Compassionate Doctor Recognition in 2012. In his spare time, he participates in several outdoor activities such as fishing and jogging. He has completed the Army Ten Miler and Marine Corp Half Marathon several times in the past several years at a relaxed pace. His adherence to physical fitness serves as an excellent example for his patients.