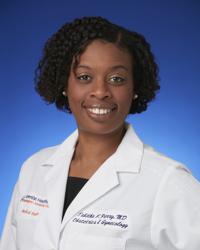 "I think it is greatly important that women take ownership of their health and their lives. As a woman myself, I greatly recognize this importance as it hits close to home," said Dr. Tabitha Perry, obstetrician-gynecologist (OB/GYN) at UM Charles Regional Medical Center (UM CRMC). Dr. Perry says that becoming a physician specializing in women's health care has enabled her to motivate and encourage women to be active participants in their health.

Dr. Perry says that her role before coming to UM CRMC consisted of juggling inpatient and outpatient responsibilities, which she felt often caused a strain on the lives of those providing care, as well as those who received it. That's why she is very happy with the new direction of the women's health team at UM CRMC. "Once the concept of an OB/GYN hospitalist emerged, this enabled an improvement in the quality of life for OB/GYNs," said Dr. Perry. "We can become more focused, more directed, and as a result provide a safer environment for all of our patients."

"Joyful" is how Dr. Perry describes her experience with the UM CRMC team.

Over the years, Dr. Perry has had the opportunity to practice in various states and settings as both a private OB/GYN and as an OB/GYN hospitalist. "Those experiences have allowed me to determine what types of environments give me the most joy, while simultaneously allowing me to fulfill the need for compassionate and conscientious women's health care," said Dr. Perry. "That is what I feel I have found at UM CRMC. From the nurses, to the staff, to the patients, everyone works hard to maintain a loving community environment that feels genuine."