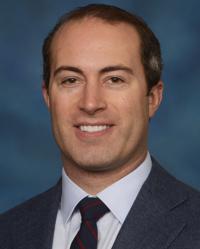 Dr. Ferris completed his undergraduate studies in 2010 at Loyola University Maryland where he majored in Biology, with minors in Business and English. He graduated from the University of Maryland Medical School in 2014 and there was elected a member of the Alpha Omega Alpha Honor Medical Society.

In 2015 he completed a medical internship at Emory University in Atlanta, Georgia and then he continued on at Emory to complete residency training in radiation oncology in 2019. He served as Chief Resident during his final year of training.

Dr. Ferris' ongoing research at the University of Maryland is focused on optimizing advanced radiation techniques to maximize control of malignancies while sparing side effects and improving long-term patient-reported outcomes. His research has resulted in numerous peer-reviewed publications and has yielded oral presentations at national and international conferences.

Overall, Dr. Ferris strives to work closely with the entire treatment team, including surgery and medical oncology colleagues, to offer cutting edge and tailored treatment for each patient. One of the main focuses in his practice at UM Upper Chesapeake is to bring world-class cancer treatment options to the residents of Harford County. He prizes meticulousness and attention to detail throughout each patient's course of radiation therapy.