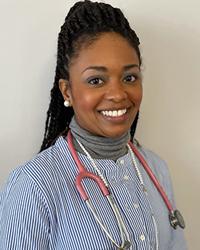 Medical school was where she combined her two loves, traveling and medicine. While in medical school, she had the opportunity to volunteer in Guatemala and Honduras. Her international mission work continued as an Obstetrics and Gynecology resident at Indiana University. She returned to Guatemala for a month, to work as the Obstetrician Gynecologist in Santiago, Guatemala during her fourth year of residency. She found that Obstetrics and gynecology combined the things that were most enjoyable about medicine, continuity of care and surgery. This gave her the opportunity to help make a positive impact on women both locally and internationally.

Dr. Outlaw returned to Northern Indiana after medical school to practice Obstetrics and Gynecology for three years, but her desire to provide care internationally lead her to sign up for Medecins Sans Frontieres, Doctors Without Boarders which took her to Aweil, South Sudan as a medical officer. She also worked in Mae Sot, Thailand at Burmese Refugee camp with the Shoklo Malaria Research unit.

She moved to Northern Virginia in 2014 and spent five years practicing in Annandale VA prior to beginning at University of Maryland Charles Regional Medical Group. Currently, Dr. Outlaw resides in Falls Church, Virginia with her dog Baxter. She spends her free time doing mission work in Haiti, volunteering with Virginia Medical Corp, Alpha Kappa Alpha Sorority Incorporated, and her church, Alfred Street Baptist Church. She enjoys traveling, reading, eating at new restaurants and spending time with her friends and family.

Her health care philosophy is that the relationship between a physician and a patient is one of the most important an individual will have. She believes that they must work together as a time in order to optimize the health of the patient.