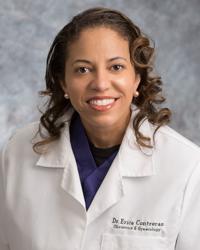 Dr. Contreras has special interests in high-risk obstetrics and posterior vaginal support. She cherishes the joyous, rewarding experience of helping expectant mothers bring life into the world. She also enjoys performing procedures that correct medical problems her patients had dealt with for a long time, such as heavy periods.

Dr. Contreras completed her undergraduate studies at Xavier University of Louisiana, earning a Bachelor of Science degree in biology. She then attended East Carolina Brody School of Medicine and completed her residency at East Carolina University-Pitt County Memorial Hospital in Greenville, North Carolina. A native of Durham, North Carolina, she moved to Southern Maryland in 2011.

Dr. Contreras is a member of the American College of Obstetrics and Gynecology, the American Medical Association, and the American Association of Gynecologic Laparoscopists. In her spare time, she enjoys cooking—particularly baking—and traveling with her husband. She has two children, Amaya and Roman, and a bulldog named Cami.