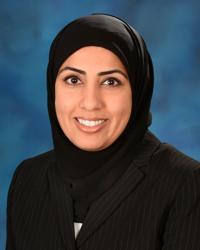 Asifa Shafi, OD, MS joined University of Maryland Eye Associates in December 2014. A native New Yorker, Dr. Shafi completed her undergraduate degree with honors at Stony Brook University. She earned her Doctorate of Optometry at State University of New York College of Optometry in 2005 followed by a residency in hospital care medicine at the Baltimore and Perry Point Veteran's Administration Medical Centers in 2006.

She holds a master's degree in vision science, which she also obtained from the State University of New York College of Optometry in 2010. Dr. Shafi collaborated with Dr. William H. Swanson and Dr. Mitchell Dul, performing extensive research on structural and functional correlations in glaucoma. She has a published paper in the Journal of Optometry and Vision Science in January of 2011 and has received the Dean Yager award for her work. Currently, she is pursuing her fellowship for the American Academy of Optometry.

Dr. Shafi loves to examine patients of all ages from 0 to 100. She has significant knowledge and experience in pediatric and geriatric eye care, soft and hard (RGP) contact lenses, diabetic eye care, glaucoma management, eye disease and general eye health. She has worked extensively with autistic children and adults with disabilities and deals with patients daily that require optimal vision.

She has been residing in the Maryland area since 2005 and has previously worked at Wal-Mart (Towson and Hunt Valley), Dankner and Fiergang Eye Associates, Baltimore Washington Eye Associates, and Eyes on Main. Each of these experiences has improved her skills as a doctor, and she is excited to join an academic setting.

She is of Pakistani descent and speaks Urdu. Dr. Shafi enjoys watching Baltimore Ravens game on Sundays, and you might see Dr. Shafi at many of the farmer’s markets in the Baltimore area.