Baby Ari was only a few months old when her mother noticed that she was having problems while feeding. Originally, her mother, Khalilah Barrier, just thought her daughter had a cold, until one day she noticed Ari sweating profusely. 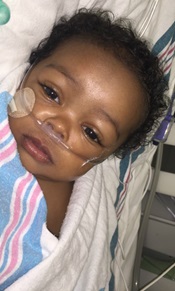 "It was like she was running on a treadmill while eating," Barrier said. "She had little drops of sweat all over her forehead. She didn’t look like a healthy baby." Little did she know that her daughter’s weight loss and sweating while eating were part of a much larger problem: ALCAPA, which stands for Anomalous Left Coronary Artery from the Pulmonary Artery. This means that Ari’s left artery flows from the pulmonary artery instead of flowing from the aorta like a normal heart. Because of this, Ari’s blood did not contain the amount of oxygen it needed, causing her to have heart attacks at four months old.

Ari was transferred to UMMC’s Pediatric Intensive Care Unit (PICU), and her family was terrified — they learned that most babies diagnosed with ALCAPA don’t live to see their first birthday. After undergoing a life-saving heart operation, which rerouted her left artery, Ari was left connected to many tubes and IVs to keep her stabilized. When the tubes were removed, Ari suddenly went into cardiac arrest. A day after the cardiac arrest she experienced seizures.

Ari went without a pulse for 39 minutes. Although she is a nurse, Khalilah was overwhelmed.

"I’m not a nurse at that moment — I’m a mom. It’s different when it’s your own kid," Khalilah said. "It felt like a nightmare." Khalilah and her husband stayed in the PICU right next to Ari for three weeks while she was being nursed back to health. The nurse manager and the entire PICU team included the Barrier family in rounds and treated Ari like she was part of their own family. One nurse even made sure that Ari had a bow in her hair every day, no matter how sick she was. These kind actions by the PICU nurses left Khalilah wanting to pay it forward. 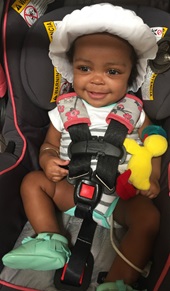 "I had always wanted to be a nurse practitioner, but being in the PICU makes me want to be a nurse practitioner in the PICU, so I can be to another family what those nurses were to us," Khalilah said. Although Ari made a full recovery, she still had issues feeding after her surgery because of the strain that her heart had endured. She continued to use a feeding tube for about a year until it was removed in May 2016.

But now, Ari is left with nothing but scars from her surgery. She is a healthy, curious two-year-old who hardly stops smiling.

"She’s like any other busy toddler," Khalilah said. "She can play and be as active as she wants. If it hadn’t been for UMMC she wouldn’t have survived. There’s nothing holding her back now."