When Nadine Bailey-Joyner got home from work one day last June, she knew immediately that something was wrong. She saw a broken chair in the dining room and food strewn on the ﬂoor. Her husband, Dwayne, was upstairs in the couple's bedroom, confused, with the left side of his face drooping. When she called 911, she already knew what the problem was.

"To see my husband having a stroke was totally out of our realm of possibility for us," Nadine says. "We're healthy. He worked out all the time, and he doesn't smoke or drink."

"We have a highly trained stroke response team, with members from the emergency department, neurology and radiology," says Brandon Cole, MD, an emergency medicine physician and the hospital's stroke program champion.

"The team will work as quickly as possible to identify the cause of the stroke and what intervention is necessary."

Dwayne was admitted to the hospital's critical care unit to be evaluated and stabilized. He had experienced a large bleed on the right side of the brain and would face a long recovery. The couple, who are both 60, didn't know what to expect.

"It was just so daunting for us," Nadine says. "But Dwayne's nurse, Vernon, was so kind and patient, and he helped to allay my fears. He was very candid with me in terms of what a stroke meant and the kind of things that we would be facing in the process. That helped me so much in keeping my sanity."

Stroke happens when a blood vessel is blocked by a clot (an ischemic stroke) or a blood vessel in the brain bursts and leaks blood into surrounding brain tissue (a hemorrhagic stroke). When either type of stroke occurs, the brain is starved of blood and oxygen, which can cause brain cells to die. The affected part of the brain often stops functioning correctly.

Treatment of ischemic stroke involves dissolving or removing the clot that is blocking the blood vessel, usually with clot-dissolving drugs, such as tissue plasminogen activator, or TPA. Bleeding in the brain from a hemorrhagic stroke causes pressure that threatens all of the brain, so treatment is aimed at measuring and lowering the pressure.

Time is of the essence in starting treatment. "TPA can be given up to 4.5 hours after stroke symptoms begin," says Renwu Chen, MD, the stroke program's medical director. "But within a minute's time, the patient will lose 1.9 million neurons (nerve cells), so the earlier patients are treated, the better. Time is brain."

"In order to give our patients the best chance at recovery from a stroke, we need to intervene as soon as possible," agrees Dr. Cole. "The longer a brain is deprived of oxygen, the worse the prognosis becomes."

UM Capital Region Medical Center is set up to help stroke patients achieve the best outcomes. A neurologist is on call 24 hours a day, seven days a week, and all of the doctors and nurses in the ED along with the critical care nurses have received special training in the care of stroke patients.

"That gives us the edge," says Nneka Ezunagu, the hospital's stroke coordinator. "Everyone is monitoring the patient to see that he or she receives the best care."

When the hospital is alerted that a suspected stroke patient is en route, doctors and nurses are standing by and prepared to act as soon as the patient arrives.

"As soon as they hit the door, the clock starts ticking," Ezunagu says. "When the patient arrives, we take them straight to CT scan to make sure there is no bleeding in the brain. If there isn't, then we'll assess the patient to see if they meet the criteria for getting TPA." The goal is to start TPA within 45 minutes or initiate other brain and lifesaving treatments.

To keep improving, the team meets each month to review its stroke cases. "We meet with the radiologist and the ED and talk about how we handled each case where the patient was treated with TPA and how to shorten the "door-to-needle' time," Dr. Chen says.

The American Stroke Association recommends getting TPA within one hour, which fortunately is the case for 70 percent of patients. "But ultimately, we would like eligible patients to get TPA within 30 minutes," Dr. Chen says.

Such efforts are paying off. The stroke center has earned recognition for meeting the highest patient care standards. For instance, it was awarded the American Heart Association's and American Stroke Association's Get With The Guidelines® Stroke Gold Plus Achievement Award, the highest award level possible.

The Road to Recovery

After treatment, patients may be admitted to UM Capital Region Health's Physical Medicine and Rehabilitation Center. There they will receive treatments including physical, occupational and speech therapies, as needed.

"The overwhelming majority of patients who have an acute stroke are going to have some sort of functional deficit or decline," says Kisha Brown, MD. Dr. Brown is the medical director of the Physical Medicine and Rehabilitation department at UM Prince George's Hospital. "All three therapy disciplines are integral to ensuring a patient regains as much function as possible." The goal with these therapies is to maintain the patient's quality of life.

Providers take a team approach to treatment. The neurologist, the physiatrist and the patient's primary physician—as well as nurses, case management staff and therapists from the three primary disciplines—collaborate to figure out the best course of treatment, depending on a person's needs and condition.

"That allows a patient to receive all of the services and care that they need quickly," Dr. Brown says. "The team approach is focused on ensuring that a patient's medical and physical functional recovery starts almost immediately. It's also the gateway to them continuing to receive those services after they leave the hospital."

Dwayne Joyner was not eligible to receive TPA, but after his condition was stabilized in the critical care unit, he was outfitted with a pacemaker so he could participate in physical therapy and begin rehabilitation. Ironically, although he had a good heart rate, an indication of his excellent physical fitness, it was too low to begin activity.

After eight weeks, Dwayne was discharged and the couple began to adjust to his new abilities. He has weakness on his left side and must wear a brace and use a cane to walk.

"Because he was having the stroke for so long, there are some mental deficits that people don't see," Nadine says. "But he's doing a lot better. My husband is a fighter."

The couple has greatly benefited from the hospital's Stroke Support Group. "That gave us a platform to share," Nadine says. "As a caretaker, having someone hear me and understand what I was saying was very, very important. For my husband, being the stroke survivor, just having someone hear his perspective and understand him was very important. And it meant so much to be in a body of people who were going through the same situation."

UM Capital Region Health has been the couple's lifeline, Nadine says. "They have been wonderful, literally from the emergency room to the support system," she says. "I don't know where we would be had it not been for the care that they gave and the level of understanding and empathy that they showed."

"We have a compassionate team of clinicians, nurses and staff that recognize the impact of strokes on patients and their families and are highly motivated to assess and treat as quickly as possible," Dr. Cole says. "We measure our success not in awards, but in patient stories and outcomes, and that drives the team to continue to provide the best care possible for our community."

What Family Members Are Saying

"It was just so daunting for us. But Dwayne's nurse, Vernon, was so kind and patient, and he helped to allay my fears. He was very candid with me in terms of what a stroke meant and the kind of things that we would be facing in the process. That helped me so much in keeping my sanity." 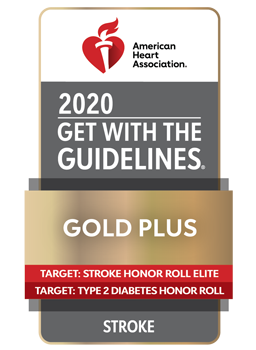