Lung Cancer Survivor Gives Thanks for Each Day

When Theresa Hairston went to see her pulmonologist for a routine appointment, she did not expect to be admitted to the emergency room the same day. But, that's exactly what happened.

A smoker, Hairston was previously diagnosed with chronic obstructive pulmonary disease (COPD), which is characterized by persistent respiratory symptoms like increased breathlessness and cough.

COPD is evaluated by performing pulmonary function testing, and Hairston's test showed that she had GOLD stage 4, or a highly severe case of COPD. The diagnosis requires additional oxygen to help her organs perform the tasks of daily living.

"My pulmonologist, Dr. Faria Nasim, found my oxygen level to be very low and told me that I needed to go straight to the emergency room for care," said Hairston, 62. "She was surprised I was able to walk into her office for the appointment."

While in the emergency room, tests were performed and she was sent home on oxygen.

A follow-up computerized tomography (CT) scan revealed a nodule on the right lower lobe of the lung, and after a biopsy, she was diagnosed with stage 1, non-small cell lung cancer, which was diagnosed at an early stage has a 92% cure rate.

According to Dr. Nasim, assistant professor of medicine at the University of Maryland School of Medicine and an interventional pulmonology specialist at UM Capital Region Health, at stage 1 there are two options of treatment. One is surgically removing the nodule, and the other is radiation treatment.

"Her long-standing history of smoking had severely reduced her pulmonary function," explained Dr. Nasim. "Surgery would mean removing more of her lung and sacrificing lung function further, and in essence, her quality of life. This was not a good option for her."

"For early-stage lung cancers, the treatment of choice is surgical resection," said Dr. Heather Lee, Hairston's radiation oncologist at UM Capital Region Health. "But test results showed that Ms. Hairston's lung function was not strong enough to tolerate surgery, so radiation therapy was recommended. Radiation therapy can be a curative option for these patients who are not a surgical candidate."

"I cannot say enough good things about my doctors and all of the medical staff that are taking care of me," said Hairston, who is appreciative each day to be able to play with her grandkids and spend time with her whole family.

"I never liked hospitals, but my time at the University of Maryland Capital Region Health was very comfortable, and everyone was so genuine and caring. After every treatment, someone called to check on how I was feeling, and that meant a lot to me."

Hairston's most recent CT chest scan showed that the cancer is smaller and has responded to treatment. Based on this imaging, she is considered a lung cancer survivor. She will continue to have yearly scans, based on national lung cancer screening criteria.

"I am a survivor and believe my faith helped get me through this and will continue to do so should I be faced with anything down the road," added Hairston. "In the meantime, I am enjoying life."

The U.S. Preventive Services Task Force (USPSTF) recommends annual screening for lung cancer with low-dose computed tomography (LDCT) in adults aged 50 to 80 years who have a 20-pack-year smoking history and currently smoke or have quit within the past 15 years. 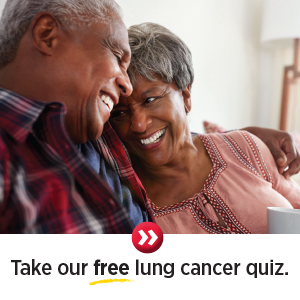